From Zelda Dungeon Wiki
Jump to navigation Jump to search
Want an adless experience? Log in or Create an account.
Lord Jabu-Jabu

Lord Jabu-Jabu from Ocarina of Time

Lord Jabu-Jabu is a guardian deity in Ocarina of Time and Oracle of Ages. 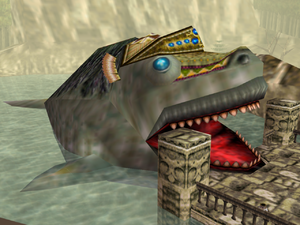 Lord Jabu-Jabu is the patron of the Zora tribe in Ocarina of Time[1], and is a large fish, or possibly even a whale. He is likened to a kami from Japanese culture, a deity of sorts.

He resides inside Zora's Fountain, which has its entrance blocked off by King Zora himself. In order to reach Jabu-Jabu, Link must go to Lake Hylia first, and dive to retrieve Ruto's Letter in a bottle. Showing this to King Zora will get him to very slowly move aside so Link can access the Fountain.[2]

When Link gets to the fountain, Lord Jabu-Jabu is very sick from the evil that is inside him. Link must offer the deity a fish, having been told that he loves to eat Fish, and it is said that if you place a fish in front of his mouth, it gives you happiness. When Link pours the bottled fish on the ground, Lord Jabu-Jabu inhales him as he tries to eat the fish.

After a while of being Inside Jabu-Jabu's Belly, Link encounters Ruto, who has escaped inside Lord Jabu-Jabu to hide from her father, King Zora. She says that she does that a lot, but this time it is filled with electric jellyfish, weird soap bubbles and tentacles with clubs at the end. Not only that, but she lost the gem that her mother gave her. This later turns out to be Zora's Sapphire, one of the three treasures Link must obtain in order to open the Door of Time and pull the Master Sword from its pedestal in the Temple of Time. Link must also defeat the evil that resides within him, Barinade. Once Link has done so, he receives gratitude from Ruto and the Zora's Sapphire.[3]

Lord Jabu-Jabu is a huge fish who stands as the Deity of the Zora tribe in Oracle of Ages. Jabu-Jabu's Belly is said to be a huge maze, but only those allowed by King Zora can enter.

Late in his adventure, Link is informed by the Maku Tree that she senses and Essence of Time within a fish. That fish is none other than Jabu-Jabu himself. Once Link saves King Zora in the Past, curing him of his illness, and helps the Fairy Queen to gain her old body and powers back so she can cleanse the seas of all the pollution, Link is allowed to enter Lord Jabu-Jabu. Inside Jabu-Jabu is the location of the seventh dungeon, as well as the next-to-last Essence of Time.