From Zelda Dungeon Wiki
Jump to navigation Jump to search
Want an adless experience? Log in or Create an account.
King Zora 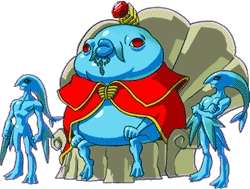 King Zora is the leader of the tribe of sea Zora who inhabit the seas at the far south-western portion of Labrynna in Oracle of Ages. Thanks to Veran's medlings in the Past, King Zora fell ill because of all the pollution throughout the sea. In the Present, King Zora has been long dead, leaving it up to Link to save him in the Past.

Once in the Past, Link is able to help rid King Zora of his illness by bringing him a Potion. Afterwards, King Zora gives Link the Library Key to the Eyeglass Island Library, where he can find the Fairy Powder to return the Fairy Queen back into her normal shape. This allows the Fairy Queen to cleanse the seas of all the pollution, thus causing King Zora to then allow Link to enter Lord Jabu Jabu and find the seventh Essence of Time.