From Zelda Dungeon Wiki
Jump to navigation Jump to search
Want an adless experience? Log in or Create an account.
Ralph 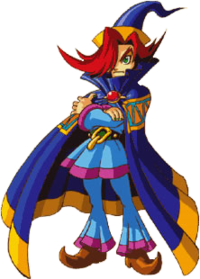 Ralph is the noble, yet very stubborn and hot-headed childhood friend of Nayru and is given the position of being her protector. Just as Link arrives to Labrynna and meets Nayru, Ralph insists that he does not need Link's help to protect her. Moments later, Veran possesses the body of Nayru, leaving a very distraught Ralph unable to fight Veran as that would also mean striking the body of Nayru. After Veran travels through a Time Portal to the Past, Ralph quickly sets off to find and save Nayru.

Ralph acts as Link's friendly rival throughout the game, as they both have similar ambitions. When Link battles Veran for the first time, separating Nayru's body from Veran, the Dark Sorceress shortly after takes control of Queen Ambi's body. Link and Ralph are safely warped back to the Present by the power of Nayru, but Ralph quickly returns to the Past to get his revenge on Veran.

Though he is the descendant of Queen Ambi, Ralph confronts Veran at the Black Tower near the end of the game, making the choice to fight Veran while she is in Ambi's body even though defeating Ambi causes him to vanish from existence. Ralph is unsuccessful in defeating Veran, but Link is able to fill in and save Queen Ambi while also defeating Veran. After Veran has been defeated, Ralph agrees to allow Link to train him so that he can better protect Nayru. In the credits, Link attempts to teach Ralph the Spin Attack, but he cannot quite get it right, and instead performs an out of control Hurricane Spin.