From Zelda Dungeon Wiki
Jump to navigation Jump to search
Want an adless experience? Log in or Create an account.
Farore 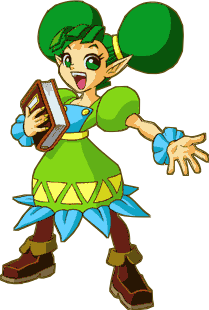 Farore is a semi-important character who appears in both Oracle of Seasons and Oracle of Ages. She is known as the Oracle of Secrets.

In both games, Farore resides in a place known as the Hall of Secrets, located inside the Maku Tree of Holodrum and Maku Tree of Labrynna. While she does not play a significant or necessary role in a playthrough of either game, she is vital to the process of linking between the two of them.

Occasionally while playing a Linked Game, Link will come across characters who otherwise do not appear in either Oracle of Seasons or Oracle of Ages. These characters will ask that he relay a secret from them to another character in either Holodrum or Labrynna -- whichever game Link's first journey was set in. When these secrets are relayed, they unlock new items and upgrades for whichever game was completed first, which can then be transferred back to a Linked playthrough by giving a second password to Farore. Farore also keeps record of all secrets Link has uncovered thus far, kept in a book known as Farore's Memory.

Farore also makes an appearance in The Minish Cap, located in the Happy Hearth Inn. In this game, she, along with Nayru and Din, is looking for a house to move into. While the three girls like being in town, Farore doesn't like the idea of living at the Inn forever.[1]

After Link has completed the Fortress of Winds, he is able to fuse Red Kinstones with Farore. This causes Gorman to appear within Hyrule Town. He has an idea that he can rent out his house to earn some extra cash.[2]

After Link finds Farore a home, she offers him Farore's Charm. To receive this, Link must have one Empty Bottle to carry it in and he can only have one at a time. Additionally, her Charm is always free and boosts attack and defense.