From Zelda Dungeon Wiki
Jump to navigation Jump to search
Want an adless experience? Log in or Create an account.
Mayor Ruul 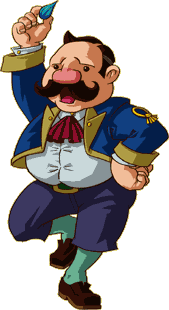 Mayor Ruul is a character featured in Oracle of Seasons.

The Mayor has a fascination for Gasha Seeds and he introduces them to Link when he first arrives.[2] When Link first speaks with the Mayor, the Mayor is astonished that Link does not know about Gasha Seeds. To welcome Link to town, the Mayor rewards him with his prized Gasha Seed.[3] The Mayor tells Link that there is a Soft Soil spot where Link can plant the seed just outside.[4]

Link can return to the Mayor's residence once he acquires Bombs. Just to the right of where the Mayor stands, there is a cracked wall that can be blown open with a Bomb. Inside this small room, Link finds another Gasha Seed.

Mayor Ruul is married to Mrs. Ruul, but strangely, the two do not live together. Mrs. Ruul lives out in the Holodrum Plain at her own Villa. The two are never seen together and it is unsure if they have any children. There is a girl that is at the Mayor's residence in Horon Village, and there are two beds in the building, but it is unsure whether or not this is the Mayor's daughter. The daughter could just be an employee who works at the Mayor's office.