From Zelda Dungeon Wiki
Jump to navigation Jump to search
Want an adless experience? Log in or Create an account.
Holodrum Plain 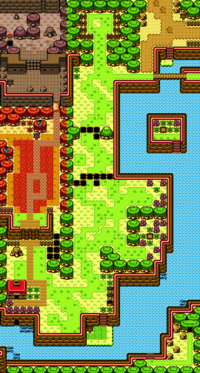 To the north of the Holodrum Plain, Link will find the Temple Remains, but he'll have to briefly travel through Natzu to reach it. At the northwest portion of the Plain, Link will find the sole passageway that leads to the Tarm Ruins. The Holodrum Plain also borders the Western Coast and Horon Village to the south, but there are no direct passageways connecting these regions.

The Holodrum Plain first becomes accessible to Link after he has acquired the Power Bracelet from the second dungeon, Snake's Remains. The plains have two default seasons. The bulk of the area is Spring and only the area leading to the Spool Swamp has a default season of Autumn.

When Link first reaches the Holodrum Plain, he can find Ricky's enclave to the north, a small area surrounded be trees. Ricky mentions Spool Swamp to the west, but says that he is unable to do anything without his Gloves. He tells Link that he lost them to Blaino over at Blaino's Gym.[1]

After Link has defeated Blaino in North Horon, he can return to Ricky and give him his gloves. Ricky is delighted that Link was able to acquire his gloves.[2] Ricky is also shocked that Link was able to defeat Blaino and Ricky will now join Link as a companion.[3] If Link has not yet acquired either of the Strange Flutes in the game, than at this point, Ricky will join Link as his Animal Companion and he'll give Link Ricky's Flute.[4]

Using Ricky, Link is able to traverse across the holes found throughout the Holodrum Plain.[5] At the west side of the Plain, there is a large cliff that Ricky is able to jump up to.[6] This route will eventually lead to the Spool Swamp.

There are a pair of Soft Soil locations found within the Holodrum Plain. The first of which is found along the east part of the plain in an area that is surrounded by flowers during the Spring. Link must use his Shovel to uncover the soft soil spot. A second soft soil locations is found on the island within the water at the northeast part of the plain. Link can only reach this island if he has Dimitri as a companion or if he has acquired the Zora's Flippers. The soft soil is located beneath one of the bushes.

Just north of the primary soft soil location, Link will find a lone bush. Beneath this bush, Link will find a Fairy that will restore his health. Each time Link leaves the region or enters a house, this Fairy will respawn.

At the south portion of the plain, there is a secret Old Man location hidden underneath a small tree. One screen east of Mrs. Ruul's Villa, Link fill find a trio of small trees. The bottom one can be burned using an Ember Seed. This Old Man will charge Link 100 Rupees to pay for the Door Repair if he speaks to him.

One screen north of Mrs. Ruul's Villa, Link will find the lone Tree Stump located in the Holodrum Plain. Link can change the season to Summer, causing Vines to grow on the nearby wall, allowing quick access to the area above. If Link changes the season here in the Holodrum Plain, it will also effect the season in the north region of North Horon. Use of this Tree Stump is required to uncover a few secrets in that area.

At the southwest corner of the plain, Link will find a cave that can only be accessed by from the water. Inside of this cave contains a treasure chest that holds a Seed Ring. When appraised this ring becomes the Octo Ring.

Later in the game, after Link has acquires five of the Essences of Nature, he will be on a journey to collect the four Jewels. One of the Jewels is the Round Jewel and it is located within the tree house at the far southeast corner of the Plain. This small land area cannot only be accessed by water. Inside Link will find an Old Man that will give Link the Jewel. 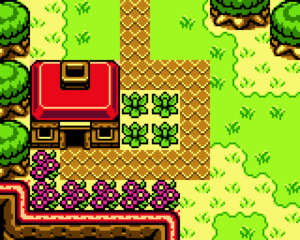 Mrs. Ruul's Villa is a location found near the southwest portion of the Holodrum Plain. Inside, Link will find Mrs. Ruul who plays a role in the Trading Sequence. Link can trade Mrs. Ruul the Ghastly Doll in exchange for the Iron Pot.