From Zelda Dungeon Wiki
Jump to navigation Jump to search
Want an adless experience? Log in or Create an account.
Mayor Plen 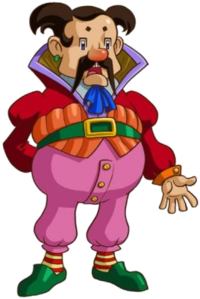 Mayor Plen is the mayor of Lynna City in Oracle of Ages. He resides within his Home, near the center of the city. The Mayor tells Link that Lynna City's history dates back hundreds of years ago, when it was called Lynna Village.[1] Within Mayor Plen's house, Link finds a Treasure Chest containing a Seed Ring. However, Link needs the Long Hook to get to it. When appraised, this Ring becomes the Green Luck Ring.

If Link has already completed his journeys in Holodrum, he can obtain a Password from Mayor Plen's Mother, who appears in Mayor Plen's House after completing the second dungeon, the Wing Dungeon. She tells Link to take the secret to Mayor Ruul, mayor of Horon Village in Holodrum, who rewards Link with the L-3 Ring Box. Equally, this password can be transferred back over to Labrynna to receive the Ring Box upgrade over there.