From Zelda Dungeon Wiki
Jump to navigation Jump to search
Want an adless experience? Log in or Create an account.
Sokra 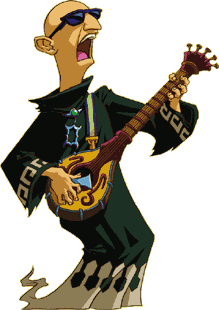 Sokra is a character in Oracle of Seasons. He is a wandering prophet who knows much about Holodrum and appears in several different locations along Link's quest.

Sokra first appears at the east end of Horon Village, but he is sound asleep. It isn't until after Link completes the Gnarled Root Dungeon that Sokra awakes. He gives Link some words of wisdom, explaining that the Temple of Seasons is calling for him.[1]

Link later runs into Sokra within the Woods of Winter. After Link travels to Subrosia and acquires the Rod of Seasons, he comes back up through the Subrosian Portal. After heading east one screen to the Woods of Winter, Sokra immediately starts talking to Link speaking about the Rod of Seasons.[2][3] Sokra explains how Link can change the season using the Rod of Seasons and the nearby Tree Stump. However, he notes that the Rod only has the Power of Winter.[4] Sokra states that there must be other entrances into the land of Subrosia and that perhaps Link once again has to return to the Temple of Seasons.[5]

Sokra later appears in Spool Swamp after Link has acquired the Floodgate Key. He explains that a new power of season is needed within his Rod of Seasons and that a new portal to Subrosia needs to be found.[6]