From Zelda Dungeon Wiki
Jump to navigation Jump to search
Want an adless experience? Log in or Create an account.
Spool Swamp 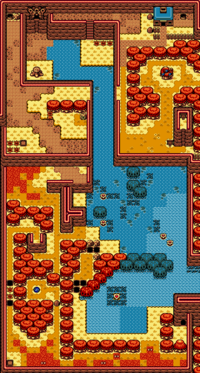 Spool Swamp is a location in Oracle of Seasons. It is located at the far western side of Holodrum. Link will journey to the Spool Swamp on his way to the third dungeon, Poison Moth's Lair. If Link has acquired the appropriate Strange Flutes, he will encounter Moosh and Dimitri here for the first the time. Depending on which Animal Companion Link has, he will need to navigate the Swamp along a different path.

The Spool Swamp is located along the western portion of Holodrum. Despite its large land area, there are only two entrances to this region, both coming from the Holodrum Plain to the east. The entrance at the north can be accessed by land, while the entrance to the south is only accessible by water. Though there are no direct pathways connecting the regions, the Lost Woods and Tarm Ruins border the Spool Swamp to the north, while the Graveyard and the Western Coast border to the south.

The Spool Swamp, as its name suggests, consists of a river that spills into a swamp at the southern region. Given its aquatic nature, it is home of many water-based enemies, including Goponga Flowers and Water Tektites. The natural season of the Spool Swamp is Autumn.

When Link first enters the Spool Swamp, the very first thing he will find is a Mystical Tree. This is a Pegasus Tree that gives off Pegasus Seeds during the season of Autumn. Using Pegasus Seeds will allow Link to run at a faster speed for a short period of time. Pegasus are required items that are utilized shortly within the Spool Swamp.

After acquiring the Floodgate Key from the Floodgate Keeper, Link can use use the underground passage at the northeast portion of the Spool Swamp. Within this cave, Link will find an Owl Statue and it gives Link advice to use Pegasus Seeds to progress onward.[1]

Near the northwest portion of the Spool Swamp, Link will find a Business Scrub. The scrub will give Link advice on a nearby Subrosian Portal, found beyond the floodgate. The scrub will also offer to sell Link a Shield for 50 Rupees. On the same screen, Link can slash the nearby bushes to find a Soft Soil location where he can plant a Gasha Seed.

One screen east of the Business Scrub, Link will find a keyhole where he can use the Floodgate Key. This will allow Link to reach the southern portion of the Swamp. Just north of the keyhole, Link will encounter Sokra for the second time. He explains that a new power of season is needed within your Rod of Seasons. He also mentions that a new portal to Subrosia will need to be found.[2]

The southern portion of Spool Swamp will differ, depending on which Animal Companion Link has. Link may find Dimitri for the first time at the east portion of the Swamp. Dimitri has been surrounded by a group of Moblins and they will sell him to Link. Initially offering 50 Rupees, Link will have to pay a total of 80 Rupees to acquire Dimitri along with Dimitri's Flute. Using Dimitri, Link can swim along the deeper water to reach the southern portion of the Swamp.

Link may also encounter Moosh for the first time. Moosh can be found at the western portion of the Swamp, where he is being surrounded and bullied by a group of Moblins. Link can save Moosh and will then acquire Moosh's Flute. Link can then use Moosh to fly over the gaps in the south central portion of the Swamp.

If Link has Ricky as his animal companion, his journey through the southern portion of the swamp is ready simple. Ricky can navigate the western cliff and use his whirlwind punch to get rid of any bushes that block his pathway.

At the southwestern corner of the Spool Swamp, Link will find the regions second Soft Soil location, this one buried beneath a rock. One screen north of this soft soil location, Link will find a Subrosian Portal, leading to the land of Subrosia. It is through this portal where Link will meet up with Rosa, journey to the Temple of Seasons, and acquire the power of Summer.

There is one Tree Stump found within the Spool Swamp, located near the northwest corner of the area, one screen south of the entrance to Poison Moth's Lair.

In the Spring the swamp water becomes rapids and is hard to maneuver through unless Link has Dimitri as an animal companion. There is a Piece of Heart, located in the center of the water, but it is only accessible during Spring. Link will need to use either Dimitri or the Zora's Flippers to acquire this heart piece.

At the southeast corner of Spool Swamp, there is a cave that is unreachable during the Spring, Summer, and Autumn. However, if Link comes here during Winter, the tree branches will fall, allowing Link to reach the cave. A simple Bomb blows open the cave and inside Link will find a Treasure Chest containing the Square Jewel. This is one of the four required Jewels needed to enter the Tarm Ruins. In a Linked Game, the Square Jewel will be replaced with 100 Rupees.

During Link's quest, he can meet an Old Man located one screen south of Gnarled Root Dungeon. He is found during the Summer when the water has receded, revealing a staircase. As soon as Link speaks with the Old Man, this triggers the side quest to acquiring the Red Ring. Four Golden Beasts will appear throughout the Overworld. One of these beasts is the Golden Octorok and it will appear at the southwest corner of the Spool Swamp.

The Golden Octorok is a significantly stronger version of a standard Octorok. Since it is only encountered during Summer, and the default season is Autumn, Link will have to use the Tree Stump located south of the Poison Moth's Lair to change the season.

Near the northeast portion of the Spool Swamp, one screen south of the Mystical Tree, Link will find a sign that hints to a secret that is only accessible during Summer.[3] After returning during Summer, Link can climb the vines and read the sign to find that it is from Vasu. He gives a hint to dig just below the sign.[4] Link can use his Shovel to dig up a Seed Ring.

The Poison Moth's Lair is the third dungeon featured within Oracle of Seasons and it is the main attraction found within the Spool Swamp. The dungeon is located at the northwest corner of the Swamp and it is only accessible by climbing up some vines during Summer. Inside the dungeon, Link will acquire the Roc's Feather, which gives him the ability to jump over small gaps. Link will battle with the mini-boss in the form of the Omuai and the dungeon boss Mothula. As a reward, Link will get a full Heart Container as well as the third Essence of Nature, the Bright Sun.