From Zelda Dungeon Wiki
Jump to navigation Jump to search
Want an adless experience? Log in or Create an account.
Subrosia Cemetery 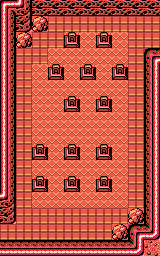 After Link has obtained the sixth Essence of Nature, he needs to go to the Subrosia Cemetery in order to find a way to the next dungeon, the Explorer's Crypt. During the storm, the Captain of the Piratians lost his bell that he received from a special someone.[4] Because of this, the Captain won't let his crew fix the ship and get it out.[5] While he sent one of his crew to find the bell, the bell is still missing.[6][7] If Link tries to talk to the Captain before completing the Ancient Ruins, he is called an inexperienced adventurer.[8] Once Link beats the sixth dungeon, the Captain lets him find his bell, as Link has become a competent adventurer.[9] On the second floor of the House of Pirates, Link can see a Piratian press four panels in order. This combination unlocks the gate to the Samasa Desert. After finding the bell, it turns out to be rusted.[10] When Link brings back the rusty bell, the Captain says the rustiness won't do and to get it polished.[11] Going to the Subrosian Smithy to get it polished, Link gives the Pirate's Bell to the Captain, getting pensive about the bell.[12] He then yells to his crew that they are off to sea, leaving the House of Pirates for the rest of the game.[13] Appearing right next to the ship, the crew fixes the ship and set sail.[14]

However, two members of the crew are left behind.[15] The Unlucky Sailor, one of the two Piratians, tells Link that if he knew the secret to being lucky, the ship wouldn't have sunk and he wouldn't have been left behind, asking him if he knows the secret.[16] If Link doesn't know it, he will meet with ill luck soon according to the sailor.[17] If he does know it, he teaches it to the Unlucky Sailor, making him lucky. In return, the Piratian gives Link something lucky if he gets 777 Ore Chunks.[18] Once he gets exactly 777 ore chunks, the Unlucky Sailor gives Link the lucky gift, it being a bomb upgrade.[19] Going downstairs since most of the Piratians left, the Subrosian that lives there tells Link that he shouldn't tell him if he is going to stay there now.[20]