From Zelda Dungeon Wiki
Jump to navigation Jump to search
Want an adless experience? Log in or Create an account.
Natzu Wasteland 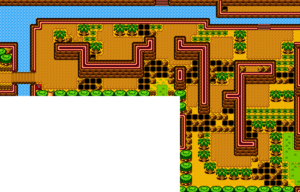 The Natzu Wasteland covers a large amount of land in the center part of Holodrum. To the South, it borders North Horon, Eyeglass Lake, and a small portion of the Holodrum Plain. To the west and north lies the Temple Remains. Also to the north, the Goron Mountain can be found. To the east, Link will find Moblin's Keep, which Link must travel through to reach the Sunken City. At the northeast corner of the region, a small portion of the Natzu Wasteland connects with Mt. Cucco.

Link can initially reach the Natzu Wasteland from two different routes. At the northeast corner of North Horon, there is path that leads to the Wasteland and Link will need to use Moosh to fly over the small pits. Alternatively, at the northwest corner of North Horon, Link can use Roc's Feather to leap over a small hole and enter the region. At the western portion of Natzu Wasteland, Link can hit a switch, extending a bridge to the west that easily connects the region to the Holodrum Plain and the Temple Remains.

Whether Link is traveling through Natzu Wasteland, Natzu Prairie, or the Natzu River, he will encounter three different caves along his journey. The caves are all identical, but their actual locations will vary, depending on which region Link is in.

Right near the center of the Wasteland, a second cave can be found next to some pits. Inside, Link will find a Deku Scrub. If Link speaks with the Scrub, he'll find that he loves seeds and also loves singing. If Link agrees that the song he sings is a great song, the Deku Scrub will fill up all of the seeds in Links Seed Satchel.[2]

The third cave in the Natzu region does not differ, regardless of which terrain of Natzu is present. This cave is located on a narrow strip of land at the base of Goron Mountain. Link will need to swim over to this small area of land to access the cave. Inside, Link can cross a trio of moving platforms to reach a Treasure Chest that contains 50 Rupees.