From Zelda Dungeon Wiki
Jump to navigation Jump to search
Want an adless experience? Log in or Create an account.
Western Coast 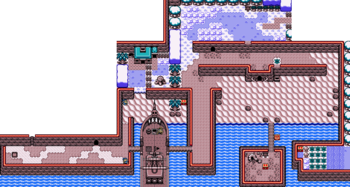 The Western Coast is a location featured in Oracle of Seasons. Located just to the west of Horon Village, the Western Coast is one of the first explored regions within Holodrum. Only the eastern portion of the region is accessible early on in the game and Link will be required to travel here to find the mini-dungeon known as the Hero's Cave. Later in the quest, after Link has helped the Piratians get out of Subrosia, he can access the western part of the region.

The Western Coast is located at the southwest corner of Holodrum and is accessible early in the game by exiting Horon Village to the west. As its name suggests, the entire southern portion of the region is along the coastline and does not border any named regions. At the west end of the region, Link can reach the Graveyard. Both the Spool Swamp and the Holodrum Plain directly border the Western Coast to the north, but neither are directly accessible.

Much of the Western Coast is along the ocean shore and consists of sandy beaches. Outside of a few Palm Trees, there is not much vegetation in the area. The exception is the northern plateau, just west of the entrance to Horon Village. This area is filled with large trees, burnable bushes, and even flowers during the Spring. The default season of the Western Coast is Winter, in which the northern plateau region is filled with blocks of snow.

When Link first enters the Western Coast, he can travel left one screen and down a screen, where he will find a cave. Inside is one of the Great Fairy Fountain locations featured in the game. Link can return to the Great Fairy here at any point to restore his health.

During Link's quest, he can meet an Old Man located one screen south of Gnarled Root Dungeon. He is found during the Summer when the water has receded, revealing a staircase. As soon as Link speaks with the Old Man, this triggers the side quest to acquiring the Red Ring. Four Golden Beasts will appear throughout the Overworld. One of these beasts is the Golden Darknut and it will appear one screen east of the entrance to the Hero's Cave.

The Golden Darknut is a significantly stronger version of a standard Darknut. Since it is only encountered during Spring, and the default season is Winter, Link will have to wait until he has access to the Tree Stump at the west portion of the region before he can encounter the Golden Darknut.

Later in the game, Link will return to the Western Coast in search for one of the four Jewels. It is located on a small island at the south end of the coast. In order to reach the island, Link must use his Slingshot and some Ember Seeds to light the Torch, causing a bridge to appear. On the small island Link can use a Mystery Seed on the large question mark, causing a Mini-Moldorm to appear. After defeating the enemy, a Treasure Chest containing the X-Shaped Jewel appears.

At the far southwestern corner of the region, Link will find the sole Soft Soil location that can be found along the Western Coast. Right next to the soft soil spot is a wall where Vines will grow during Summer. These vines, along with the nearby cave, are the two ways that Link can reach the Graveyard.

Just north of the Pirate Ship, Link will find an uninhabited house. Link can walk through the house to reach the lone Tree Stump within the Western Coast. During a Linked Game, a friendly Ghini will appear within this house. Link can obtain a Secret from the Ghini, who Link finds out is a former member of the Eyeglass Island Library from Labrynna.

The Hero's Cave is the main attraction for Link at the start of the game as it where he will find the Wooden Sword. This sword is required before Link can visit the Maku Tree. While Link is traveling through Horon Village, he can speak to the villagers that guide him towards the Hero's Cave. In particular the Painter speaks of the Hero's Cave within the Western Coast.[1] The mini-dungeon is extremely short and has very weak enemies, including Keese, Gel, Red Zol, and Green Zol.

In a Linked Game of Oracle of Seasons, Link starts his quest with the Wooden Sword and thus, will not need to travel to the Hero's Cave initially. Instead, the inside of the Hero's Cave is completely revamped and consists of a much more challenging mini-dungeon. At the end of the mini-dungeon, Link can acquire the Seed Ring that becomes the rare Power Ring L-3.

Considering the Western Coast is one of the first regions that Link travels to along his quest, it consists some of the most basic enemies. This includes Red Octoroks and Sand Crabs.

During a Linked Game a Ghini will appear in a house located on the western part of the coast. Link can obtain a secret password from the Ghini, who then reveals himself to be a former member of the Eyeglass Island Library in Labrynna