This article is about Link's default outfit in Ocarina of Time. For the outfit in Tri Force Heroes, see Kokiri Clothes. 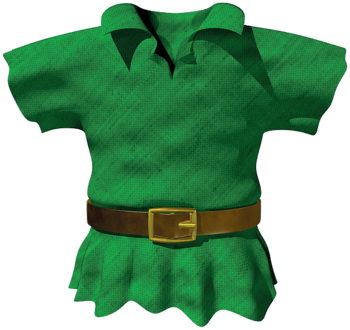 The Kokiri Tunic is an article of clothing worn by Link that first appears in Ocarina of Time.

"A humble but comfortable green garment. Everyone in the Kokiri Forest wears one"

Link starts off the game wearing this green tunic along with its complimentary Kokiri Boots, as is customary among the Kokiri.

Unlike the Goron and Zora Tunics obtained later on, the Kokiri Tunic has no special defensive properties, but it is the only garb Link can wear as both a child and an adult and cannot be eaten by Like Likes, owing to its inability to be repurchased if lost. When worn as an adult, the tunic also sports a set of white tights and gauntlets that do not appear when Link wears it as a child.

The Kokiri Tunic reappears in Majora's Mask as the clothing Link in his normal form wears throughout his adventure in Termina. Certain aspects of the tunic, such as its green hat, gauntlets, and kilt, are incorporated into the appearances of the different forms Link takes while wearing the Deku, Goron, and Zora Masks. 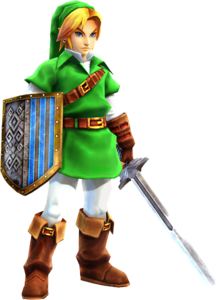 The Kokiri Tunic appears as an outfit in Hyrule Warriors. Wearing it makes Link resemble his adult Ocarina of Time counterpart, including hairstyle, but does not have any gameplay implications.

For the Wii U version of the game, it was only available in the West as part of the purchasable "Ocarina of Time Costume Set" DLC with the "Era of the Hero of Time Robes" for Zelda, costing US$0.99, £0.89, €0.99 or AU$1.30; or the Courage Set in Japan with Twilight Princess and Skyward Sword costumes for Link for ¥400.

In Hyrule Warriors Legends and Hyrule Warriors: Definitive Edition, by contrast, it is included in the base game, unlockable through Adventure Mode in Termina map square F7.