From Zelda Dungeon Wiki
Jump to navigation Jump to search
Want an adless experience? Log in or Create an account.
Riddle Quest 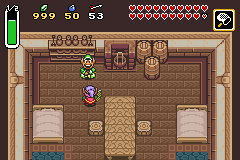 The Riddle Quest is an optional sidequest in A Link to the Past only available in the Game Boy Advance version. Once there is an active file of Four Swords with 10 Medals of Courage, Link can speak with Q. Bumpkin to initiate the Riddle Quest. Link needs to use his Bug Net to get different items throughout the sidequest and place them in the Basket.

"Cock-a-doodle-doo! What is it? Go find it and catch it with your bug- catching net!"

Cuccos can be found in multiple places in the Light World, but most readily around Kakariko Village.

After giving the cucco to Q. Bumpkin, he will send a Wooden Carving of a cucco to Link's House.

Sand Crabs are found in the Light World, along the shores of Lake Hylia, the Waterfall of Wishing, and the river that connects the two bodies of water.

Red Rupees can be found occasionally by defeating enemies, but a more reliable way is to use the switch in the Swamp Ruins to drain the Great Swamp, exposing a fish. Grabbing it in Link's bare hands, carrying it to Lake Hylia and returning it to deep water will lead it to throw a Red Rupee to Link as thanks[1]. Caution should be taken, however, as throwing the fish too far into the lake can lead to the rupee landing on the cliff in an unrecoverable place.

As above, drain the Great Swamp to obtain a Fish, but catch it in the Bug-Catching Net and take it to Q. Bumpkin rather than throwing it into a lake.

After giving the fish to Q. Bumpkin, he will send a wooden carving of Link to Link's House.

The Octoballoon can be found on the southern shore of Lake Hylia. The full octoballoon cannot be caught in Link's net, but the mini-octoballoons exposed by killing the "parent" can be netted and taken to Q. Bumpkin.

"Sprinkle and watch it wobble... What is it?"

Link can use Magic Powder or the Quake Medallion to turn enemies such as enemy soldiers, octoroks or deadrocks into Slimes, which can be netted and taken to Q. Bumpkin.

Squirrels can be found in the Master Sword's grove in the north-west corner of the Lost Woods.

After giving the squirrel to Q. Bumpkin, he will send a wooden carving of Zelda to Link's House.

Fake Master Swords are found throughout much of the Lost Woods. However, as they do not regenerate, pulling them all earlier in the game can render the Riddle Quest incompletable. On a similar note, they must be caught directly with the net, not pulled by hand.

Apples can be found by dashing into, or using the Quake Medallion on, certain trees - the one closest to the House of Lumberjacks is directly south of the entrance to the series of caves which lead up Death Mountain.

"The spectacled wanderer... What is it?"

Cukeman are created by using Magic Powder on Buzz Blobs, which can be found in places such as the Lost Woods and the shore of Lake Hylia.