From Zelda Dungeon Wiki
Jump to navigation Jump to search
Want an adless experience? Log in or Create an account.
Goron Shop (Ocarina of Time) 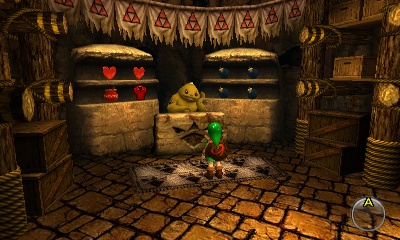 The first time Link enters though, he is limited as to what he can purchase. Link is unable to purchase Bombs until he has acquired a Bomb Bag from Dodongo's Cavern. Link also cannot purchase the Goron Tunic as a child. Thus limiting the items that Link can buy to just Recovery Hearts and some Red Potion.

When Link returns as an adult, the shop is again blocked off and won't be open until Link speaks with Link the Goron, who is rolling around town. While Link the Goron will give Link a Goron Tunic, if at any point the tunic is gobbled up by a Like Like, Link can purchase a now one from the Goron Shop.