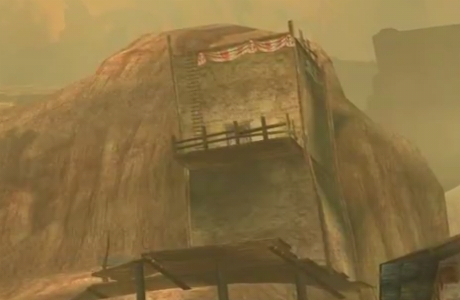 The Lookout Tower is a location featured in Twilight Princess. It is situated to the far end of Kakariko Village within the province of Eldin. Giving its towering presence, this location provides a perfect viewpoint of the entire village. After Link has completed the Goron Mines, he can find one of his childhood friends of Ordon, Talo, at the peak of the tower.

The significance of this location isn't all that important in the main quest; however, it can prove pivotal, as it gifts Link with a rather useful item. After Link has ridden the evil deep within the treacherous Goron Mines, the relationship with the people of Kakariko and the Gorons improve. Now several Gorons from Death Mountain come down to relax within the confines of the village. Link can gain the assistance of the Gorons in order to traverse to the top of the building. The Gorons offer Link a chance to stand on their backs while they assume a grounded position where they proceed to launch Link several feet into the air allowing him to ascend the tower effectively.

After reaching the top, Link encounters Talo who explains that he insists to watch over the village in case any monsters return but wishes he had a bow to fend them off. He then acknowledges Link's newly acquired Bow and asks if he can show him how it is used. Link returns to the surface, where he meets with Talo's younger brother, Malo, who sets up a targeting game. Link must first hit two targets with his Bow, one short range and the other medium range. Talo then shouts to Link to see if he can hit the small pole situated on top of the Lookout Tower. Link must utilize all his skill to hit the extremely small target. When he does so, Talo rewards him with a Piece of Heart. As an extra reward, the Hawkeye now becomes available for purchase at Malo Mart for 100 Rupees.

Within the second floor of the tower's interior, Link can find a Treasure Chest, which contains a Purple Rupee. After the young hero has encountered Jovani, he is tasked with finding multiple Poe Souls throughout Hyrule. If Link traverses to the top of the tower during the night time, he can use his senses to spot an Imp Poe. As Wolf Link, he can defeat the menacing Poe and obtain a valuable Poe Soul.