From Zelda Dungeon Wiki
Jump to navigation Jump to search
Want an adless experience? Log in or Create an account.
Ordon Goat 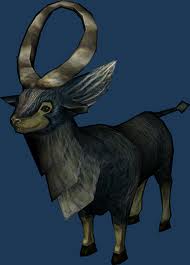 The Ordon Goat is a particular race of goat that are native to the Ordona Province in Twilight Princess. The race itself seem very domesticated and they stay within the Ordon Ranch, where they are herded by Link and the owner of the ranch, Fado. The goats seem to be a vital part of the life of the people of Ordon Village. They rely on their milk as well as other dairy goods such as the Ordon Goat Cheese, which is said to be a delicacy within Hyrule. The Ordon Sword is said to be made out of the goats horns. All this may indicate that the goats are important for trading as well.

The Ordon Goats themselves are very large, larger than the average goat. They have mostly blue fur, the other being white. The Ordon Goat also has distinct features such as large circular horns that connect to form an oval shape. They also seem to be an important sign of symbolism in Ordona Province as the Light Spirit Ordona closely resembles a goat and the Ordon Shield has the symbol of the goats' circular horns.

The Ordon Goats themselves only play a small part within Twilight Princess as a whole. They are first encountered in the prologue of the game, where Fado asks Link to herd the goats as his job prior to him becoming a hero was a Goat Herder. In this section, Link must herd ten goats before sundown and then he must do his final herd by herding twenty goats before he sets off to Hyrule. There is also a section in the prologue where Link must stop a goat from entering Ordon Village, a skill he uses later on in the game against the Gorons.