From Zelda Dungeon Wiki
Jump to navigation Jump to search
Want an adless experience? Log in or Create an account.
Shadow Kargarok 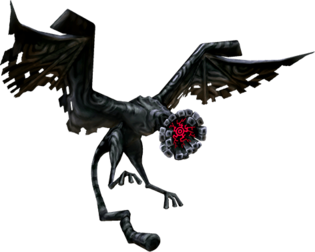 A Shadow Kargarok is an enemy Link encounters only in Twilight Princess. They are very similar to the standard Kargarok, the main difference being they have a slightly different appearance and are only found in areas engulfed in Twilight. They can be defeated in the exact same manner Link defeats regular Kargaroks, with the Hero's Bow being shot from a distance or using the Master Sword when it comes close. As Wolf Link, the Jump Attack is the best option.

Shadow Kargaroks, once having sight of Link, flies right down at him. Also, if Link shoots one with his Hero's Bow, the Shadow Kargarok takes a couple of seconds to recover, and then gets up and flies directly at Link. They will do this no matter what distance Link shoot them from. This habit of the Shadow Kargarok can be used to Link's advantage, by shooting them once and then waiting for them to come to Link.

Shadow Kargaroks are found in the Palace of Twilight as well as the Twilight-covered Hyrule Castle Rooftop, Kakariko Village, Death Mountain, and Hyrule Field.