From Zelda Dungeon Wiki
Jump to navigation Jump to search
Want an adless experience? Log in or Create an account.
Double Clawshots 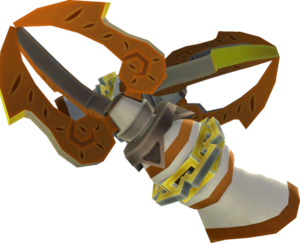 The Clawshots from Skyward Sword

The Double Clawshots are an item that has appeared in Twilight Princess and Skyward Sword.

The Double Clawshots allow Link to grapple to targets, and then upon hooking to one, Link can aim around with his other Clawshot to grapple to another target. Link can also use it to attack enemies, grab treasures and Rupees, and break pots and other various objects. This item is required for stage two of the STAR Game, and to complete most of the later dungeons of the game, including the City in the Sky and Palace of Twilight.

In Twilight Princess, Link acquires his second Clawshot in the seventh dungeon of the game, the City in the Sky. After defeating the mini-boss of the dungeon, an Aeralfos, he can open a chest and find another Clawshot. Combined with the one he found in the Lakebed Temple, he creates the Double Clawshots.

In Skyward Sword, Link acquires the Clawshots after completing the Lanayru Province Silent Realm. It is one of the four of the Goddess' gifts, and is used to reach the Lanayru Sand Sea, search the Sandship, and eventually find Nayru's Flame.