From Zelda Dungeon Wiki
Jump to navigation Jump to search
Want an adless experience? Log in or Create an account.
Rupoor 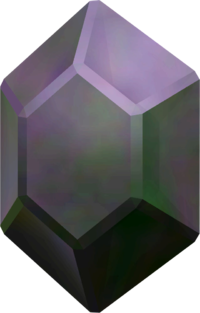 A Rupoor from Skyward Sword

Rupoors are recurring items in The Legend of Zelda series. They are shaped like an ordinary Rupee, but have a black color. Instead of giving Link Rupees, they actually take them away.

Rupoors are basic and common in Four Swords, talking away ten Rupees when any of Links picks them up.

Rupoors are first seen in Phantom Hourglass inside the Ghost Ship, after one of the Cubus Sisters tells Link to get treasure from one of two chests. If Link listens to the sister's recommendation on which chest he should open, it will result in a Rupoor instead of treasure. Besides here, Rupoors are only found in the Isle of the Dead on Harrow Island inside the maze. This maze doesn't have walls, instead the barriers are made of Rupoors that either take away ten or fifty Rupees.

Rupoors are found mainly during the Thrill Digger minigame, which cause Link to lose ten Rupees. Also, if Link uses his Slingshot on the silver Rupee Ore in the walls of the cave where Thrill Digger is, sometimes Rupoors will pop out. In another minigame on Fun Fun Island, if Link lands on the dark space with a Rupoor on it (called the "Loser Space"), he will have to pay Dodoh ten Rupees. Rupoors are also found in select underground places, and can only be found by using the Mogma Mitts. Normal rupees might become Rupoors if mushroom spores are sprinkled on them.