Isle of the Dead

From Zelda Dungeon Wiki
Jump to navigation Jump to search
Want an adless experience? Log in or Create an account.
Isle of the Dead 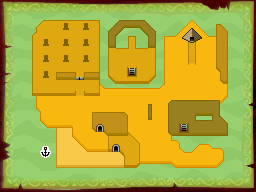 The Isle of the Dead is a small island from Phantom Hourglass. This location, as its name implies, inhabits the deceased. More specifically, the ancient Cobble Knight, Brant. His tomb can be found in the Phantom Corridor, but can only be reached once Link has obtained directions from each Sage in the Sage's Graveyard. Brant will give the young hero the Regal Necklace so he can lift the tornado that is barricading the Isle of Ruins.

In addition to the Phantom Corridor and Sage's Graveyard being on the island, there is also a Rupoor Maze. If Link wishes to complete the maze without collecting a single Rupoor, he must be careful and walk extremely slow. In addition to being agile, he must avoid the Keese that flood the area. At the end, he is rewarded with Rupees, pots, and four treasure chests. These chests contain: two ship parts, a treasure map, and a Courage Gem.