From Zelda Dungeon Wiki
Jump to navigation Jump to search
Want an adless experience? Log in or Create an account.
Cobble 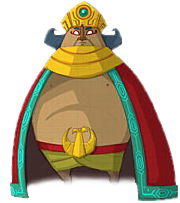 The Cobble are an ancient race in Phantom Hourglass. They reside in the water beneath the Isle of Ruins. Some members of the race allegedly boast powers of premonition which are greatly augmented following death.

The Cobble were established architects who crafted the pyramids dotting the Isle of Ruins. They are also the creators of Eox, the guardian of Mutoh's Temple. The great king of the Cobble was served by four courageous Knights: Brant, Bremeur, Doylan, and Max. The majority of the Cobble race has perished, leaving only a supernatural presence behind. The remaining living members have scattered themselves across the World of the Ocean King.

The Cobble dress themselves in a very old and out-dated fashion. They strongly resemble the ancient Egyptians with their designs and general apparel.