From Zelda Dungeon Wiki
Jump to navigation Jump to search
Want an adless experience? Log in or Create an account.
Cobble Knights 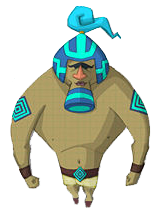 Brant, one of the four Cobble Knights

The Cobble Knights are four knights from Phantom Hourglass chosen to serve King Mutoh and protect the Cobble Kingdom. As of the current events that have happened in Phantom Hourglass, all of them have perished along with their king and kingdom. Link has the ability to speak with them, as he needs their guidance when he searches for the final Pure Metal, Aquanine.

Brant is the fourth-ranked Cobble Knight, and can be found resting within his grave on the Isle of the Dead. He immediately notices the spirits of Power, Wisdom, and Courage standing by Link's side. He then allows the hero to take the Regal Necklace; an item used to get rid of the hurricane surrounding the Isle of Ruins.

Bremeur is the third-ranked Cobble Knight, and can be found resting within his grave on the Isle of Ruins. He guards the seal of the land, and informs Link that King Mutoh originally had the Pure Metal he was seeking for. Unfortunately, a vicious monster had invaded the King's Temple, awakened him from his slumber, and stole the Pure Metal from his grasp. After telling Link of what had happened, he creates a bridge for the hero to cross, this leads to the eastern portion of this island.

Doylan is the second-ranked Cobble Knight, and protects the King's Key while ensuring that the land is sealed. He can be found resting in his temple on the eastern portion of the Isle of Ruins. He bestows the key upon Link, telling him to return to Bremeur's temple to lower the water level and restore the land.

Max is the first-ranked Cobble Knight, and is the sole guardian of Mutoh's Temple. He's surprised to see a Human being able to not only communicate with spirits, but to also break the seal and restore the land. He proceeds to tell Link that he must draw the sacred crest on the nearby door. If he is successful, he'll finally be allowed to confront the deceased King Mutoh.