From Zelda Dungeon Wiki
Jump to navigation Jump to search
Want an adless experience? Log in or Create an account.
Uncharted Island 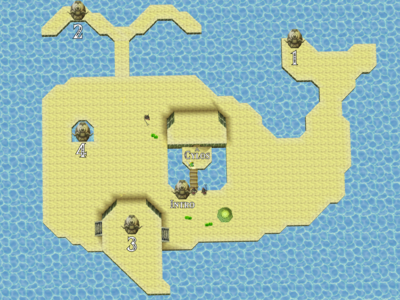 Outline of the island, with major features annotated.

The Uncharted Island is a location in Phantom Hourglass. Link must solve a Gossip Stone puzzle to reach Golden Chief Cylos and obtain the Cyclone Slate. Cylos once sought refuge on this island while being watched over by Oshus.[1] The Old Wayfarer discovered this island during his travels.[2] It is not known whether he set foot on it.

The island is the only location which does not appear already mapped out. It is overrun with various enemies. Once manually charted, the island can be seen to be in the shape of a whale blowing water out of its blowhole. Four Gossip Stones are found in various locations representing specific parts of the whale. A fifth Gossip Stone is located in the center of the island in front of a small body of water, which prevents access to the cave on the other side. A Treasure Map can be found by digging directly south of the Gossip Stone at the whale's "eye".[3]

The cave in the center of the island is split into two segments. The first features a tall plateau with stairs leading downwards. A stone sign hinting at the location of a Treasure Map is found in the west.[3] The northeastern corner, which can be reached using the Grappling Hook, hides a treasure chest containing a Courage Gem. Another opening in the north leads to the second segment of the cave, where Golden Chief Cylos and several Golden Frogs reside. After talking to the Golden Chief, Link will be given the Cyclone Slate.