From Zelda Dungeon Wiki
Jump to navigation Jump to search
Want an adless experience? Log in or Create an account.
Isle of Gust 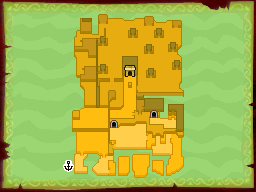 Map of the island

The Isle of Gust is a location from Phantom Hourglass. Link travels to this island in search of the Spirit of Wisdom, held at the second dungeon of the game, the Temple of Wind. During his travels, the Old Wayfarer spent months on this island, though later found several other islands, one of which, Bannan Island, he made his new home.[1]

The Isle of Gust can be found in the center of the Northwestern Sea. Its port is located on the southwestern edge of the island.

The island consists primarily of windswept sands, uneven terrain, some caves, and a large field of sand with several windmills.

The first obstacle one encounters are several sandy plains, where a strong, but sporadic wind blows west. These plains are inhabited by Red ChuChu as well as several Miniblins. Located in a small valley among these plains, behind a cracked wall, is the Old Wayfarer's previous hideaway, which may be opened using Bomb Flowers.

Jumping over the valley using the strong winds leads to a second valley housing several Miniblins and three digging spots which each yield one Red Rupee if dug up with the Shovel. A cave infested with Miniblin is located in the northwestern corner of this valley. It leads to a high plateau.

Behind a cracked wall in the windswept sands, one can find the Old Wayfarer's Hideaway. It features some furnishing, the Old Wayfarer's Journal, a chest containing a Courage Gem, and a map showing his plans to head to Bannan Island, as well as hinting at the locations of the Uncharted Island and Zauz's Island.

Between the windswept sands and the high plateau lies a connecting cave. Upon entering, Link must make his way east, past a few Miniblins, leading to a large opening, the center of which is overrun by Miniblins. A path leads along the edge of the opening, allowing the enemies to be bypassed. This path is adorned with wind geysers that push Link towards the center if the passage is not timed properly.

The center features a treasure chest containing a Wisdom Gem. If all Miniblin are defeated, a second chest appears, which contains a Treasure Map.

Past the cave, a set of gusts lead Link to the highest point of the island, where another digging spot containing a Big Green Rupee can be found. One has to, once again, use the strong winds to jump over a gap, leading to the entrance of the Temple of Wind.

The Temple of Wind is found in the center of the island. It is originally blocked off by wind geysers, which first need to be deactivated by solving the puzzle of the windmills.[2] A map directs Link to the southwestern corner of the island, where the puzzle is further explained.

Following a wind gust and a door, one reaches further fields with several wind gusts, some of which are shoveled over with dirt.[3] On a small elevation in the west corner of the first field, a chest containing a Power Gem can be found. Link must make use of the Shovel to make progress past the wind gusts leading to the southwestern corner. Just before the plateau, a digging spot containing a Big Green Rupee can be found.

The plateau further explains that the temple entrance is opened by blowing three specific, sacred windmills on the sandfields, which are identified by a map on the wall.[4]

The sandfields in the north of the island contain eight windmills, a large population of Sandworms, and two Gossip Stones, which hint at methods of dealing with said Sandworms.[5][6] Once the correct windmills are activated, the gusts blocking the Temple of Wind stop, and the doors connecting the sandfields and the entrance of the temple open.