From Zelda Dungeon Wiki
Jump to navigation Jump to search
Want an adless experience? Log in or Create an account.
Temple of Wind 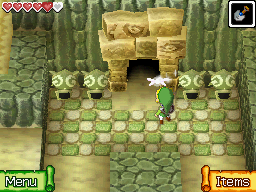 The Temple of Wind is the second dungeon in Phantom Hourglass, located on the Isle of Gust. Cyclok is the dungeon boss and can be defeated using the dungeon item, the Bombs.

In order to reach the Temple of Wind, Link must first navigate the fog that prevents him from reaching the Northwest Quadrant of the Great Sea. It is described as "a temple reached into the sky itself".[1]. Once Link clears the fog, he has safe passage to the Isle of Gust.

Navigating through the Isle of Gust is a fairly linear process, but in order to gain access to the Temple, he will travel to the north end of the island, where Link must cause the three Sacred Windmills to spin, to open the path forward.[2] The two Windmills on the far left, as well as the windmill at the southeast part of the area will cause the doors to open, and the wind geysers to settle down. This will allow Link to enter the Temple.

The Temple of Wind has both a Wind and Sand theme with many of the puzzles early on in the dungeon, revolving around waiting or manipulating wind geysers. There are a number of Bomb Flowers found throughout the dungeon and Link will utilize them to defeat enemies and solve puzzles. As Link progresses, he will pick up the Bombs as the dungeon item, with the later portion of the dungeon relying heavily on Bombs in order for Link to progress. Much like the area surrounding the Temple, the Basement of the dungeon is littered with Sandworms, requiring Link to either move carefully, or use Bombs or Bomb Flowers to defeat them.

Link will eventually battle with the Temple Boss, Cyclok, Stirrer of Winds. Link will need to use his Bombs or the nearby Bomb Flowers, tossing them into the wind geysers, which will launch up and explode, dealing damage to Cyclok. Once Cyclok is defeated, Link will rescue Neri, the Spirit of Wisdom. Link will acquire a Heart Container, as well as two minutes of Sand of Hours.