This article is about the dungeon in Phantom Hourglass. For the level in Four Swords Adventures, see The Ice Temple. For the dungeon in A Link to the Past, see Ice Palace. 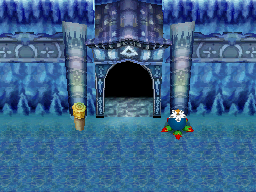 The Temple of Ice is a dungeon in Phantom Hourglass. It is found within the Southeast Quadrant.

After Link has acquired the Southeastern Sea Chart, he can venture to either the Goron Temple or the Temple of Ice. Alternatively, Link can also acquire the Northeastern Sea Chart and head towards Mutoh's Temple. When approaching the Isle of Frost, Link will find that the entire island is surrounded by ice and he will need to use his Cannon to shoot down the ice so he can dock at the island.

Link will soon find that there is an Imposter Yook living as an Anouki in the Anouki Estates. After Link finds out that the Anouki resident Aroo has been captured, the Imposter Yook will flee to the Great Ice Field at the east side of the Isle of Frost. The Island Chief will then grant Link access to the east side of the island and after fighting off some Yook, he will gain access to the Temple of Ice.

As its name suggests, the temple is ice-themed, with many slippery platforms as well as ice-based enemies, including Ice Bubbles and Ice Keese. Early on in the dungeon, Link will utilize his Boomerang to solve puzzles before taking on the dungeon mini-boss, which consist of a pair of enemy Yook. After doing so, he will acquire the dungeon item, the Grappling Hook.

Link will make extensive use of the Grappling Hook in the second half of the dungeon, using it to grapple across gaps, to create tight ropes, and to pull down on levers. The grappling hook can also be used on the new enemy Stag Beetles, as Link can pull off their mask, making them vulnerable to Link's sword attacks.

The Boss of the Temple of Ice is Gleeok, the two-headed dragon. While Gleeok has been a reoccurring boss in the Zelda series, this particular battle incarnation more resembles that of Trinexx from A Link to the Past, as each of the two heads of Gleeok have either a fire or ice element. The key to defeating Gleeok is to bounce the fire attacks towards the ice head of Gleeok, and to bounce the ice attacks towards the fire head of Gleeok. Link can do so by creating diagonal tightropes, using the Grappling Hook.

During the second phase of the battle, Gleeok will bite off the front pegs. This time when Gleeok is preparing an attack, Link must use the Grappling hook on the tongue of the boss, connecting it to one of the pegs, causing the dragon head to fall to the floor. After a number of sword slashes, the heads will be defeated.

Link will be awarded a Heart Container and 2 more minutes of Sand of Hours. Link will also acquire the pure metal Azurine.