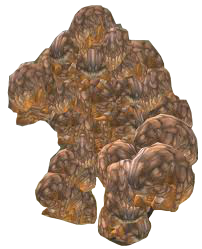 A Goron Golem is a beta enemy from an unreleased version of Twilight Princess. This enemy is basically several Gorons who have come together to form a giant humanoid creature. It is quite massive, and was never used in the final version. It is unknown what its weakspot was going to be, as it was never finished. It is possible that the Goron Golem was meant to be the Mini-Boss or Boss of the Goron Mines, but was later replaced with Dangoro or Fyrus; however, this is all speculation. The Goron Golem can be fought by using cheat codes. When this is done, several Goron will be walking around mindlessly, and when Link approaches, they will come together to form one of these massive enemies. Likely because of the fact that the Goron Golem was never finished, it appears as if not to be there, as Link can walk right through it, and its punches go right through Link.