From Zelda Dungeon Wiki
Jump to navigation Jump to search
Want an adless experience? Log in or Create an account.
Shadow Deku Baba 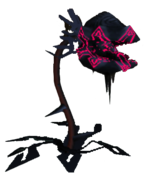 Shadow Deku Babas are enemies from Twilight Princess. Shadow Deku Babas are the Twilight counterpart of the Deku Baba. This is common in Twilight Princess, to have a light world enemy with a twilight counterpart that are typically exactly the same, apart from physical appearance. Other examples include Keese and Shadow Keese, or Kargarok and Shadow Kargarok. Shadow Deku Babas pose little threat to Link, as they are stationary and cannot attack beyond their relatively meager reach. However, they do have more health than regular Deku Babas. Regular sword slashes or Spin Attacks will do, or, if in Wolf Link form, Jump Attacks work as well.