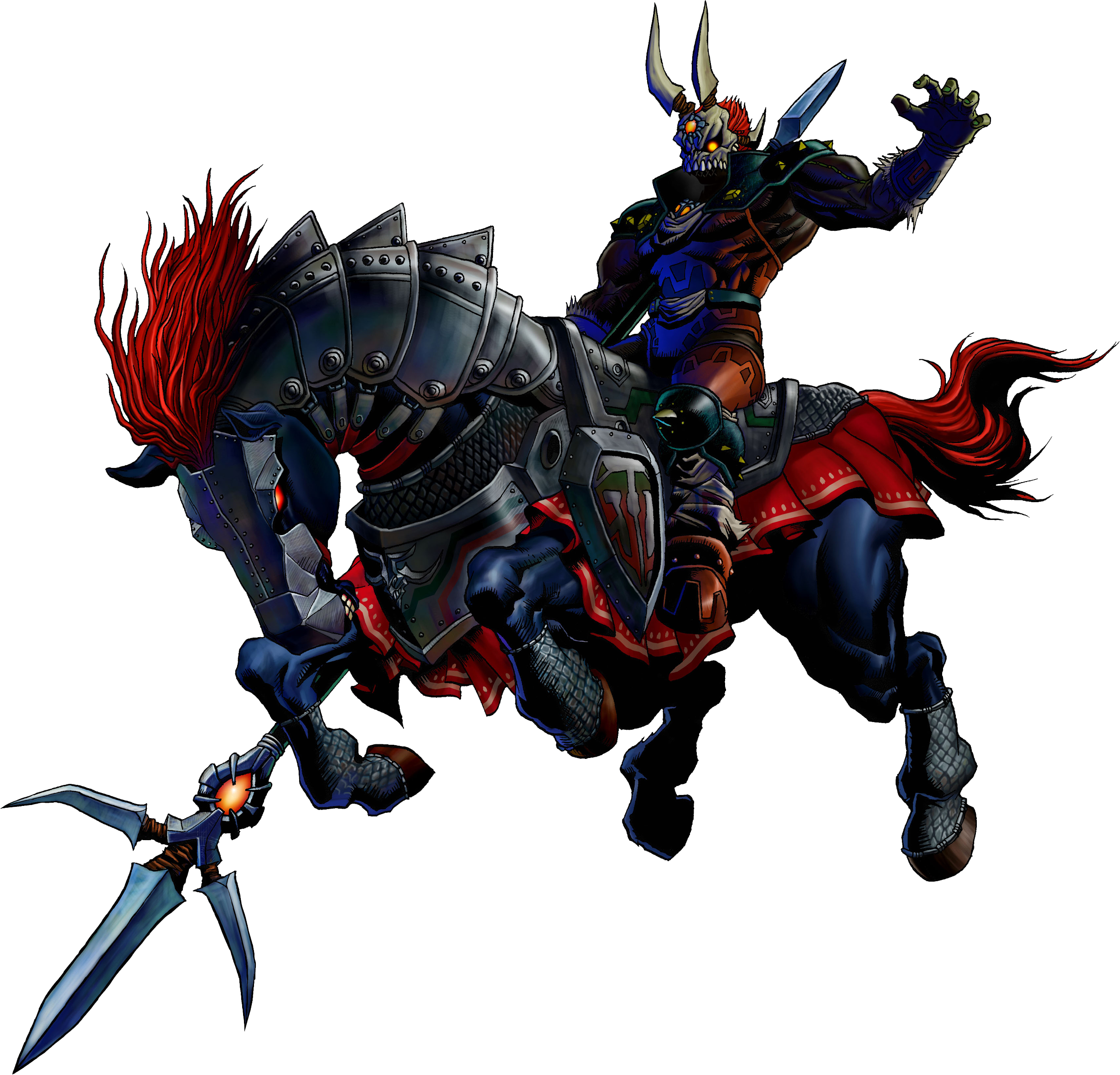 Phantom Ganon is a recurring character in The Legend of Zelda series. He is a creation of Ganondorf and serves as his minion to try and stop Link from interfering with his business.

In Ocarina of Time, Phantom Ganon is the boss of the first adult temple, the Forest Temple. Link must use the Fairy Bow to hit Phantom Ganon as he is coming out of one of six paintings around the area. After three shots from the bow, Phantom Ganon leaves the paintings to attack Link. Link must deflect his magic shots back back and forth between the two of them with the sword until Phantom Ganon misses. Slash him when he is on the ground, and soon enough he is defeated. After the battle, Ganondorf tells Link that what he fought was merely a phantom and how it was such a waste. Ganondorf then banishes the phantom to the gap between dimensions.[1]

Phantom Ganon appears as a mini-boss in the Forsaken Fortress. Link must play Dead Man's Volley with him, similar to the second phase in Ocarina of Time. After defeating him, Link receives the Skull Hammer.

He also appears in Ganon's Tower, where he can be found in an endless maze. Link must find the Light Arrows and use it to shoot him, leaving only his sword behind. Link must then use it to destroy an otherwise indestructible wall. However, Link cannot use his sword outside the maze.

Phantom Ganon appears twice in Four Swords Adventures. His design is highly similar to that of The Wind Waker. He is first found on the Hyrule Castle stage. Like in previous games, the Links must deflect his magic attacks back at him to stun him and then attack him. If they miss the shot, it hits the wall behind them and fires out several smaller orbs that can harm the Links. At times, Phantom Ganon slashes forward with his sword, forcing them to dodge. After he is defeated, a downward staircase appears, leading the Links to where the Blue Maiden is located so that they can rescue her.

Later, the Links encounter him again at the end of the Temple of Darkness. However, this time he can split into four clones, all of which will fire energy orbs at them. Only the shot from the real Phantom, which is in color, can be deflected. The orb starts out green, but it changes colors as different colored Links hit it. One he is slain, the Links can proceed into the next room, where they discover the Dark Mirror is missing and free the Red Maiden.

During the "Horseback Ganon" boss fight, Ganondorf summons Phantom Ganons that try to knock Link off Epona. However, they can easily be avoided or attacked.