From Zelda Dungeon Wiki
Jump to navigation Jump to search
Want an adless experience? Log in or Create an account.
King Dorephan 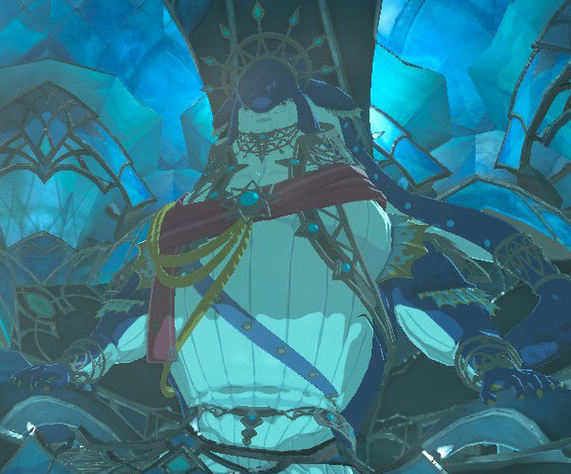 King Dorephan is a character in Breath of the Wild. He is the King of the Zora and reigns over Zora's Domain. He is the father of Mipha and Sidon.

King Dorephan can be found in the Throne Room of Zora's Domain. Given his large size and stature, he never leaves the throne room.

As part of the Reach Zora's Domain quest, Sidon will guide Link to Zora's Domain. Once Link arrives at the Throne Room to speak with King Dorephan, the main quest will be completed. Once Link arrives, the King quickly sees the Sheikah Slate that is around his waste and recognizes him as Link, the Hylian Champion from 100 years ago.[1][2] The King is delighted to see Link, although he had previously through that Link had fallen in battle. He is happy to see that he actually survived.[3] After hearing that Link was asleep at the Shrine of Resurrection, he asks Link if he remembers his daughter, Mipha. He is saddened that Link has no recollection of her.[4][5]

The King will then ask Link for some help as Zora's Domain is in great danger due to the Divine Beast Vah Ruta.[6][7] Although even asking Link for help causes the King's assistant, Muzu to voice his immediate displeasure. [8][9] King Dorephan explains that the threat presented by Vah Ruta not only threatens the Zora, but also all of Hyrule. The groups need to put aside their past differences in order to deal with this particular crises.[10] Muzu still rejects the King's peace offering, as he blames Hylians for 100 years ago, when they had abused their power, messing with the ancient civilization and turning the Divine Beasts against them.[11]

King Dorephan explains that Vah Ruta has a unique power of producing an endless supply of water. The result has caused an endless plague of heavy rain, as well as the Eastern Reservoir filling to capacity. The reservoir will not hold much longer and once it bursts, water will engulf all of Zora's Domain.[12] However, due to the research done by Princess Zelda, King Dorephan knows that the orbs on Ruta's shoulders are mechanisms that can control the water that it generates. However, they need a shock of electricity in order to work and keep the water under control.[13][14] Siden mentions that one of their fellow Zora, Seggin, had his it with a Shock Arrow, and it temporarily slowed down the water production. However, as the Zora are water creatures, they are naturally vulnerable to electricity and were not able to hit the Divine Beast with enough juice.[15] After asking Link to help stop Ruta's destruction, Link explains that he was instructed by Princess Zelda to board the Divine Beast and appease it from within.[16]

The King is shocked to heard that Princess Zelda is still alive. He knows that if they can in fact appease the divine beast, it can be used to help seal Calamity Ganon.[17] After Link agrees to help out, the King will offer Link the Zora Armor.[18] When wearing this tunic, Link will have the ability to ascend up waterfalls, just like a Zora.[19] This gift is met with strong resistance from Muzu, who says that the garment was made by Mipha, and it was only meant as a gift for whomever she was to marry.[20] After Muzu storms off, the King downplays the situation, as he knows that just the mention of Mipha has caused stress on Muzu.[21] The King mentions that Muzu was instructed to find the shock arrows needed to appear Vah Ruta.[22] After Sidon offers to help, the King points Link to the square down below to speak with Muzu.[23]