From Zelda Dungeon Wiki
Jump to navigation Jump to search
Want an adless experience? Log in or Create an account.
Malanya 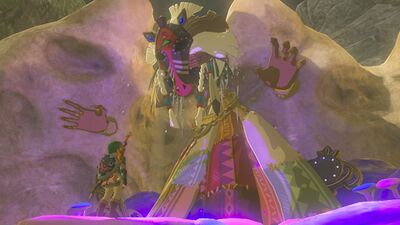 "So... you would like to revive this horse? This one, specifically? I can do that, of course! But... what is this... This horse says that YOU killed it! You! How could you?! Do you plan to revive it just to kill it again? Are horses only a tool to you? Do you treat their noble lives so casually that you'd use them and throw them away? If I were a horse right now... I'd kick you in the chest! I... jest. You accidentally struck the horse, I'm sure. Would you like to revive this loyal, temporarily betrayed friend?"

Malanya is the god who watches over the horses of the world. He makes his home in the Faron Region in the Malanya Spring, near the Lake of the Horse God.

When the player finds the Malanya Spring, Malanya has been trapped in a Great Fairy Fountain-like flower bud for an unspecified length of time, and requires 1,000 Rupees to regain his power. This is a fixed amount, unrelated to having released any of the other Great Fairies.

Once Malanya's power is restored, at any time Link can go to them to have a horse who was registered to Link when it died revived. Malanya cannot revive a horse if that would give Link more than five registered horses, although they will offer to release one of his current horses to bring him below that limit.

Grateful for being released, Malanya's first revival of a horse will be for free, but further attempts will elicit Malanya asking for one Endura Carrot per horse.[1]

Malanya closely resembles the horse head constructs on top of Stables all across Hyrule, and their facial designs are reminiscent of Malanya's headdress, suggesting a connection to the god as a sort of effigy. The fact that Malanya only revives horses that are registered at stables further lends to this implication. It's also offhandedly stated in the game that there is a god that protects stables[2], implied to be Malanya.

Restoring Malanya does not bear any influence on armor upgrading like the rest of the Great Fairies do, nor is the price required to revive him influenced by the other Great Fairies. Malanya is not particularly close to any Shrine of Trials or Sheikah Tower (the closest being Ka'o Makagh Shrine), but it's considerably easier to reach for the first time than the Great Fairy Tera's fountain, as there are no environmental impediments to reaching it.

Malanya is the subject of the Great Fairies Quest Shimmering Horseshoe. Having been convinced to join the fight against the Calamity by the Great Fairies, the player must supply 7 Diamonds, 30 Octorok Trophies, a Wizzrobe Trophy and 2 Lynel Trophies to commission him "a massive horseshoe pendant covered in diamonds". In return, he teaches the Great Fairies a Bonus Combo.

He is also mentioned in the Lushify the Spring quest, as a beneficiary of increased numbers of visitors to the Great Fairy Fountains.

Breath of the Wild Key Characters[edit][hide][show]
Retrieved from "https://www.zeldadungeon.net/wiki/index.php?title=Malanya&oldid=433086"
Categories: