From Zelda Dungeon Wiki
Jump to navigation Jump to search
Want an adless experience? Log in or Create an account.
Banji 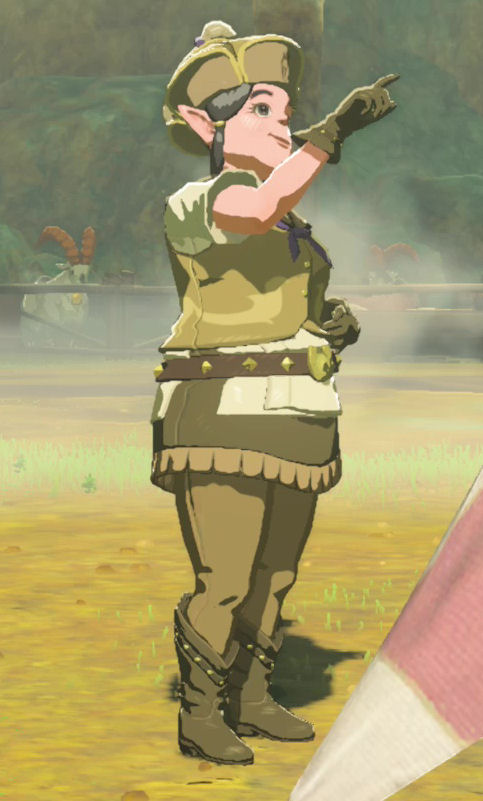 Banji is a character in Breath of the Wild. She is a Hylian that works at the Tabantha Bridge Stable and is an informal guide to Link once addressed.

At 7am each morning, Banji heads outside to prepare the hay for the goats at the stable. At 10am, Banji then makes here way over to where the Cooking Pot is, where she is cataloging some of the cargo from the stable.[1]. At 3pm she makes her way over to where the horses are, taking care of them.[2]. At 9pm she will head inside and can be seen looking after some of the children at the Tabantha Bridge Stable. During the overnight hours, she spends time standing near their beds and watching them sleep.[3].

Banji will give Link directions and insight about the areas surrounding the stable. To the east is Ludfo's Bog, which is under persistent thunderstorms. However, once Link completes the Trial of Thunder quest, the area will clear up. Banji thinks it was the Goddess Hylia that was responsible for finally clearing the dark storm clouds above and now she wants to take the horses out there on a trip.[4]

Banji will also describe the area south of the stable, beyond the Tamio River, up on Satori Mountain. She mentions the legend of the Lord of the Mountain that is said to have lived on the mountain and how it is a common bedtime story told to the children. She also mentions a god that watches over stables, implied to be Malanya.[5]

The area to the west is the Tabantha Great Bridge, which the stable is named after. Banji tells Link that if he follows the road, he'll eventually lead to Rito Village where the Rito live. However, it is a very long walk, so Link should pack well. Furthermore, she's concerned about Medoh, who is flying above the village, and is unsure if it is safe to be there.[6]

Banji will also mention that to the north, on the other side of Mount Rhoam, Link will find an old lad named Konba. Konba runs the Footrace mini-game, located at the Footrace Check-In. Banji recommends giving it a visit.[7]