From Zelda Dungeon Wiki
Jump to navigation Jump to search
Want an adless experience? Log in or Create an account.
Kaneli 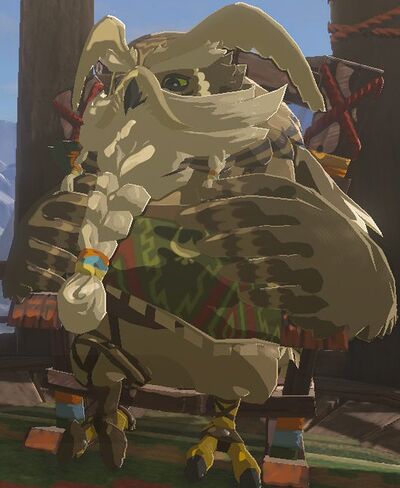 Kaneli is a character in Breath of the Wild.

Kaneli is the village elder at Rito Village, living in the hut at the very top of the village. He can be found sitting in his rocking chair where he often will fall asleep. Kaneli has a distinctive appearance from other Rito as he has more of an owl-like feature, both in terms of his shape and color.

When Link first approaches Kenali to speak with him, Kenali immediately recognizes the Sheikah Slate on his hip.[1] At first Kaneli thinks that Link is a Champion, but realizes he likely is just a descendant, somebody who inherited the Sheikah Slate.[2]

Kaneli mentions that Teba is a warrior of Rito Village, residing right next door. He thinks that maybe Teba's wife Saki might know about Teba's whereabouts.[4][5]

Kaneli will also give something background on Master Revali, who was a fierce warrior who's skill was recognized by King Rhoam, where he was entrusted with controlling Divine Beast Vah Medoh. Master Revali was a celebrated warrior, but he fell in battle 100 years ago to Calamity Ganon.[6] Medoh was a misbegotten inheritance from the ancient Sheikah that was created eons ago to defeat Ganon. However, 100 years ago the beast was since taken over by the same evil force that it was meant to defeat. The beast would then start to attack innocent people, possibly foretelling the return of Ganon.[7]

Once learning that Link is there to help neutralize the Divine Beast Vah Medoh, he directs him to the Flight Range, in order to meet Teba.

If Link returns to Kaneli once Windblight Ganon has been defeated inside of Vah Medoh, he will gift the Great Eagle Bow, the same wielded by Revali 100 years ago, upon Link.