From Zelda Dungeon Wiki
Jump to navigation Jump to search
Want an adless experience? Log in or Create an account.
Buliara 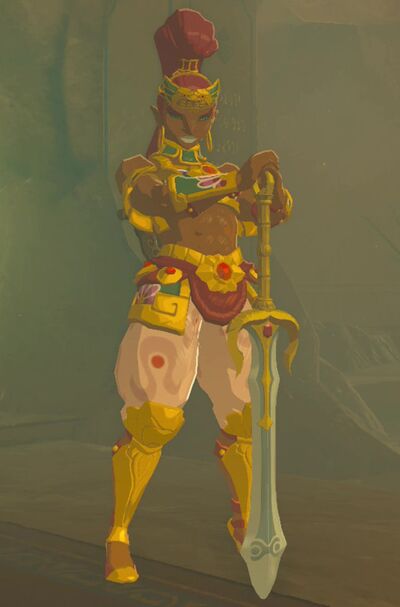 Buliara is a character in Breath of the Wild.

Buliara serves as the temperamental bodyguard of the Gerudo chieftainess, Riju. Riju can be found sitting on her throne in Gerudo Town, and Buliara is almost always by her side. She is rather protective of Riju, due to her young age and the recent rise of the Yiga Clan. Whenever Riju seems to doubt herself, due to her own inexperience, Buliara is always there to take the blame in her stead.[1]

When first appears in front of Riju, Buliara is very defensive of Riju, telling Link to state his business and to keep his distance.[2] After Link tells Riju that he's there to tame the Divine Beast Vah Naboris, Buliara chimes saying that only Lady Urbosa was capable of doing such a thing, and she, along with the rest of the Champions had died 100 years earlier.[3] After Riju recalls that the fallen swordsman during the Calamity was also named Link, she seems a bit more intrigued with Links story.[4] Although Buliara will jump in, stating that the hero from the Calamity carried the legendary Master Sword with him, and Link is not carrying such a sword.[5] Buliara also thinks back and remembers that none of the Champions were Hylian women. Although it is at this point that Buliara realizes that Link is in fact a man.[6]

While Riju is quick to trust Link, Buliara is a bit more cautious. Buliara suggests to Riju that if Link wants to help, perhaps he should first prove his worth by trying to recovery the stolen Thunder Helm.[7] Buliara encourages Link to visit the nearby Barracks and speak with Captain Teake. The Captain has all the information regarding the Yiga Clan, who are responsible for stealing the Thunder Helm.[8][9]

Breath of the Wild Key Characters[edit][hide][show]
Retrieved from "https://www.zeldadungeon.net/wiki/index.php?title=Buliara&oldid=256869"
Categories: