From Zelda Dungeon Wiki
Jump to navigation Jump to search
Want an adless experience? Log in or Create an account.
Yunobo 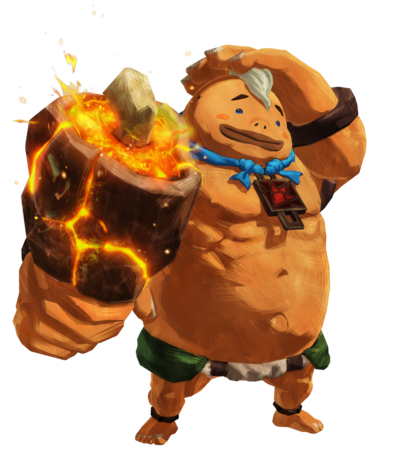 When the corrupted Divine Beast Vah Rudania reactivated, it caused unnatural eruptions that disrupted work at the Northern Mine to which lava levels rose drastically and caused the said mines to close down. Determined to put a stop to its rampage, Bludo and Yunobo often kept it at bay, but try as they might, Vah Rudania kept returning for more.

Link first meets Yunobo after saving him from a cave located in the Abandoned North Mine. Yunobo was in the mine to collect some painkillers for the Goron Boss, Bludo, as his back issues were complicating. Yunobo is grateful for Link rescuing him, and he returns to Goron City to deliver the pain killers to Bludo, who is unable to join them when his back pain got the better of him. Yunobo later assists Link in climbing Death Mountain and taking down the Divine Beast Vah Rudania, which was wreaking havoc on the residents in the city below. Rudania summons various Sentries, to which Yunobo claims he always gets caught[citation needed]. Link can use Yunobo as a cannonball to fire at Rudania, which doesn't harm Yunobo at all, since he can use his ancestor Daruk's ability, Daruk's Protection, to negate any potential damage.

Once Rudania has been neutralized, Yunobo will see Daruk's spirit standing on Vah Rudania as Daruk also notices him which gives him relief that the Gorons are still thriving as Yunobo waves to him. He will return to Goron City and await Link's return and tell him that he saw Daruk and that he has gained his courage since their adventure, and they return to Bludo, who is surprised to see that the situation with Rudania has been permanently resolved just as his back had improved, which gave the impression that he was lying.

In the Water and Fire Scenario, Yunobo travels through time to save Daruk from Fireblight Ganon by using his barrier to block off the large fiery rock to prevent fatal impact, which surprises Daruk that another Goron is using the same power as him.[1] Yunobo blocks the attack again and assures Daruk that he is here for back up.[2] As Fireblight Ganon intimidates them, Yunobo becomes frightened until Daruk returns the favor in the same manner, telling him to relax,[3] as Yunobo gets back into the fighting stance.[4] Yunobo's support to Daruk allowed Link and his friends enough time to reach them,[5] which is helped that Mipha was similarly spared and had neutralized the lava flow blocking the way. After Fireblight Ganon is defeated, Daruk thanks Link for helping them out and slaps his back, making Link jump forward,[6] and he proceeds to thank Yunobo for saving his life and also slaps his back.[7] When Sidon explains to the confused Mipha that he came from the future,[8] Daruk laughs dismissively,[9] before asking Princess Zelda about Hyrule Castle's fate.[10] Soon, Yunobo teams up with Daruk and as the latter deals with the Guardians aboard Vah Rudania, he gushes at Daruk's magnificence and addressing him as "Great Daruk",[11] though Daruk admonishes him for referring to him as such,[12] while Yunobo lets him know that he won't promise anything.[13] Daruk laughs as he shifts his focus on saving Eastern Hyrule.[14] Yunobo keeps a look out for danger and lets Daruk know what is happening and they decide to destroy the bridges to deter reinforcements and taking out their stronghold while preserving theirs and they eventually emerged victorious.

In the EX Battle for Kakariko Village EX Guardian of Remembrance Scenario, Yunobo handles the enemies on the ground while Daruk assumes control over Vah Rudania again to deal with larger forces, with their enemies consisting of Ganon's monsters and Sooga's Yiga militia that were invading Kakariko Village. Once they were dealt with, a crowd of Sheikah civilians cheer for the heroes, Yunobo notices Daruk glancing at him and panics and refuses to take credit for a job well done.[15][16] He goes on to tell the story of how he was once frightened by everything, up until a certain Hylian knight showed up and inspired him to be braver and stronger, but he believes that he still has a long way to go.[17] Daruk smiles as he takes Yunobo's arm and raises it into the air as the crowd applauds for them once more and lets Yunobo know that he is proud to have him as a descendant and he dubs him the Champion of the Future.[18] Yunobo didn't know what to say,[19] but Daruk adds that he should give his friend his regards when he returns to his own time,[20] which prompts Yunobo to smile widely.[21]

In the Relentless as a Waterfall Scenario, Yunobo and Daruk managed to arrive in the nick of time to help Sidon and Mipha with back up as Vah Ruta is starting to lose power during a tough battle. With the additional help from the Gorons, they managed to keep the line busy until the Hyrulean military fires the cannons to destroy the bridge as the Malice Guardians crossed onto them, making them fall with it. With the Guardians defeated, Akkala Citadel was successfully defended.

In the All Hyrule, United Scenario, the Champions, present and future, the Divine Beasts and vast armies of every race across the kingdom to Hyrule Field. Daruk is pumped for the fight,[22] and Yunobo is noticeably more confident as he is ready for the battle ahead of them.[23] With her surviving father's approval, Princess Zelda takes command of the united Hyrulean army as she gives a speech that Hyrule is their home that must be defended and as long as they are not divided but united, they can't be stopped. They charge into the various outposts to take control of them, as well as destroying the monsters that are holding up the barrier surrounding Hyrule Castle so the Champions can open fire. Despite the Blood Moon's appearance reviving the fallen monsters, the army managed to slip through.

In The Future of Hyrule Scenario, Princess Zelda leads the ground army as Revali and Teba lead the aerial forces as they charge into Hyrule Castle. Harbinger Ganon and its seer, Astor awaited their arrival as the latter is losing his mind, ranting that it was his fate to crush them under his heels. The Blight Ganons are faced off for the last time and are defeated forever, and they confront the villainous duo which they are victorious over them. Astor furiously orders the harbinger to devour them, only to be devoured by the Malice itself to transform into Calamity Ganon. Some of the Malice infects Terrako, turning it against Link and the princess. Once it was defeated, Yunobo and the Champions have a moment to mourn for it with Zelda, who is now angered and determined than ever to bring the abomination down, and they rush upstairs to where Calamity Ganon was waiting for them. The beast proved to be too much for the heroes initially to the point where Zelda tried to use her power to defeat it. It does, however, bring Terrako back to life which it immediately rushes upstairs and leaps between her and Ganon, penetrating Ganon's defenses and allowing the warriors to attack it effectively. When it was badly wounded, Link uses the Master Sword to slash Calamity Ganon and Princess Zelda uses her power to finally destroy him forever. As the kingdom of Hyrule rejoices, the Champions have a moment to enjoy the newfound peace they have worked to preserve as Terrako's blessed screw glows and sends Yunobo, Sidon, Teba, and Riju back to their own time. Daruk promises that he will always cherish their time together, even if it didn't last very long,[24] and Yunobo happily tells him that he is the best.[25] Princess Zelda promises that she will never forget what they have done for them and wishes for light to shine on their future for all time.

In the secret DLC ending, Yunobo and Daruk are seen sitting at the high cliff of the canyon at Death Mountain where they are enjoying a Rock Roast meal together, and they are later seen talking with the other Champions as Terrako amuses them.