From Zelda Dungeon Wiki
Jump to navigation Jump to search
Want an adless experience? Log in or Create an account.
Kass 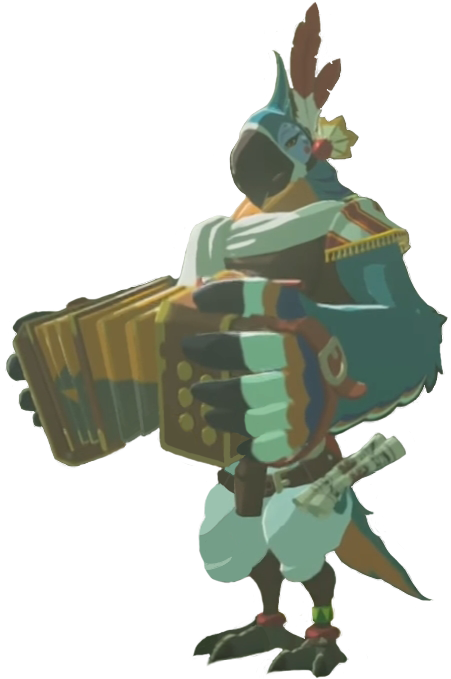 "May the light illuminate your path."

Kass is an accordion-playing Rito from Breath of the Wild. He can be found at various locations in Hyrule and will provide Link with cryptic riddles, which mainly mention Shrines, such as the Shrine Quest: A Song of Storms.

The songs were taught to him by his late mentor of the Sheikah tribe, who was a court poet for the Royal Family of Hyrule; his mentor died before Link's awakening from the Shrine of Resurrection, leaving Kass to pass on the ancient songs.

At each stable where Kass appears, he will play the song, which highlights the history of Calamity Ganon.

The kingdom of Hyrule is a vast and storied land,
Oft grasped in the palm of a villainous hand.

A dark force of destruction, many times undone,
Rises once again–Ganon, the calamitous one.

But hope survives in Hyrule, for all is not lost,
Two brave souls protect it, no matter the cost.

A goddess-blood princess and a fearless knight,
They appear in each age to fight the good fight.

Their battle with Ganon I've committed to song,
To keep it through time, no matter how long.

Now begins the second verse, listen and you'll know,
Of their battle with Ganon 10,000 years ago.

The kingdom of Hyrule was once a land of lasting peace /
A culture of such strength and wit, that suffering did cease.

But Ganon lurked beneath the surface, strengthening its jaws /
So the ancient people of Hyrule set out to help the cause.

Their efforts bore fruit in an automated force,
To help avert Calamity by sealing it at its source.

Four giant behemoths for which power never ceased,
Each of these titans was called a "Divine Beast."

And free-willed machines that hunted down their prey /
These Guardians were built to last so they could join the fray.

To guide the beasts in battle, warriors were needed,
So four Champions were pledged to see Ganon defeated.

And when Calamity Ganon reared its head, Hyrule rose against it /
The optimism of Hyrule all the more incensed it.

Ganon raged in its assault, boiling with hate,
It gnashed its teeth and thrashed about, but it was all too late.

The Guardians kept the heroes safe through every hour...
The Divine Beasts unleashed attacks that weakened Ganon's power.

The hero with the sealing sword struck the final blow,
And the holy power of the princess sealed Ganon so.

And that is the story of the brazen attack,
On Calamity Ganon 10,000 years back.

After Link completes all seven shrine quests, Kass returns home to Rito Village, and can be found on the south-facing platform next to Akh Va'quot Shrine singing with his children.

Kass's Journal is on top of one of the mushroom trees in Washa's Bluff, above the location of the Under a Red Moon Shrine Quest and the Mijah Rokee Shrine. It contains notes on each of the ancient songs he has been researching.

"I leave here a record of my search for the ancient songs of Hyrule."

"The ancient song of Pagos Woods."
It seems that a song has been passed down through the ages in the Pagos Woods area of Faron.
The song references mythical creatures such as dragons and giant serpents.
I wonder if such creatures ever really existed. Or perhaps they still exist today!

"The ancient song of the West Hyrule Plains."
On the south side of the West Hyrule Plains, there is a bridge called Jeddo Bridge.
Near this bridge, there are a number of circular rocks with holes in their centers.
Perculiarly enough, these rocks are apparently mentioned in an ancient song from the area.
It sounds rather odd, but I hope to find out more about this ancient rock song.

"The ancient song of Rabia Plain."
Apparently Rabia Plain in the northern part of Hateno is home to an ancient song about beasts.
Rabia Plain is northeast of Kakariko Village. I'll likely stop by the village during my search for the song.

"The ancient song of Calora Lake."
Apparently there is an ancient song about the giant boulder in Calora Lake in the Faron region.
I hear the area is prone to violent thunderstorms, I'll need to prepare before I go searching for the song.

"These are all of the ancient songs that I have discovered.
I will continue my journey, hoping the day will come when I can pass them on to the Champion of Hyrule. "

Kass also appears after completing the Path of Light trial in the Etsu Korima Shrine and shares another ancient song.

"The flames crawl, the waters rise, the lightning strikes, the wind sighs.
A beast beyond the divine four awaits a hero forevermore.
Let not the sound leave horses riled.
Breathe in the breath of the wild."

After completing the Champion's Ballad, Kass will perform one final song and will give Link a photo of Princess Zelda and all the Champion's. This photo may be taken to Link's home in Hateno Village (if you've completed the quest) to be displayed on the wall there.

Breath of the Wild Key Characters[edit][hide][show]
Retrieved from "https://www.zeldadungeon.net/wiki/index.php?title=Kass&oldid=323492"
Categories: