A Song of Storms

From Zelda Dungeon Wiki
Jump to navigation Jump to search
Want an adless experience? Log in or Create an account.
A Song of Storms 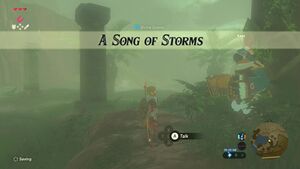 A Song of Storms is a Shrine Quest from Breath of the Wild.

When Link travels anywhere around the Calora Lake, the area is in a perpetual thunderstorm. Climbing up to Calora Lake from the south is rather difficult without Revali's Gale, and the area is more easily reached from the mountains to the north. Kass can be found playing his accordion and when spoken to, he will tell Link of the ancient song of the area.[1]

"When a lost hero calls down lightning from the sky, The monk responds from a giant mound on high."[2]

To begin, talk to Kass on the east side of Calora Lake, and listen to his song. The objective here is to cause a lightning strike on top of the mound just to the southwest of where Kass is standing. In order to do so, you have two options. First is to climb up on top of the mound a drop a metallic weapon. This can be a sword, shield, or a bow. The metal object will attract lightning. Move away from the mound, and wait for lightning to strike the mound and reveal the shrine. The second option is to use Urbosa's Fury while standing near the mound. Either option will reveal the Qukah Nata Shrine. After examining the nearby pedestal, this will complete the shrine quest.

The shrine is just a blessing, so there are no challenges inside. Open the treasure chest found here to acquire the Rubber Tights. Then head over and speak with Qukah Nata at the alter to acquire the Spirit Orb.