From Zelda Dungeon Wiki
Jump to navigation Jump to search
Want an adless experience? Log in or Create an account.
The Serpent's Jaws 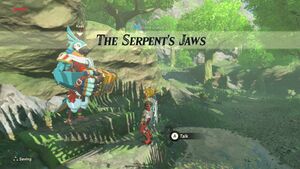 The Serpent's Jaws is a Shrine Quest from Breath of the Wild.

To begin the quest, travel along the main pathway through the Finra Woods towards the Pagos Woods. Link will find Kass playing his accordion on the south side of the path. Speaking to Kass will begin the Serpent's Jaws shrine quest where he will play an ancient verse passed down in this region.[1][2][3]

Kass refers to a shrine near a forest dragon and hints that it could be near the Damel Forest, just north of his current location. Glancing at the map, it can be seen that there are some ruins that resemble that of a dragons head, just north of the Dracozu Lake. The path through the Damel Forest is very dangerous and it is much easier to reach this area by heading to the Dueling Peaks Tower and then traveling southward.

When Link arrives at the Spring of Courage, he will find a Goddess Statue. The Goddess Hylia will ask Link to offer up Farosh's Scale[4]

The shrine is accessible without triggering the quest, as long as a scale is obtained.

During the evening Farosh can be found near the Bridge of Hylia, and he also appears near the Gerudo Highlands. If it's Link's first encounter with Farosh, the dragon will drop a Scale regardless of where it's struck; if it's not, striking any part of its body, other than its mouth, horn, or claw, Farosh will drop Farosh's Scale somewhere nearby. There are several locations where Link can encounter Farosh.

However, the easiest way to acquire Farosh's Scale is near Lake Floria. Link can warp to the Shoda Sah Shrine, near the Riola Spring. From here, Link can equip the Zora Armor and the Thunder Helm or any shock resistant gear if he has it. Drop some Wood and Flint and then start a fire here by striking it with a metal weapon. Sit until morning and then jump straight into the water below. Swim up the waterfall and you will encounter Farosh immediately. Link will need to strike Farosh with an arrow and then collect the scale.

Return to the Spring of Courage and offer up Farosh's Scale. Hylia will accept the offering, opening the path behind the statue, leading to the Shae Katha Shrine.[5]