A Gift for the Great Fairy 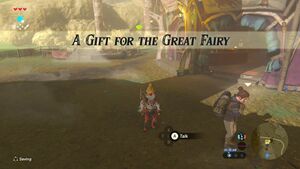 A Gift for the Great Fairy is a Side Quest in Breath of the Wild.

Talk to Toren at the Tabantha Bridge Stable to start this quest. Toren wants to travel to the Tabantha Tower, as from there, he can find the Great Fairy Fountain.[1] However, Toren is not up to it, as he doesn't think he would be able to climb up the tower. So instead, he will give Link 500 Rupees and task him to find the Great Fairy, and to give her the offering.[2]

Toren gives you 500 rupees to give to the Great Fairy as an offering. If you have already unlocked the tower, warp over to the Tabantha Tower. If not, you will need to head west across the Tabantha Great Bridge. From there, the safest path is to head north once you cross the bridge, climbing over the Piper Ridge. Toren suggests to Link that sometime in the afternoon, the shadow of the tower will point to the Great Fairy's fountain.[3] During the afternoon, the shadow of the tower appears to the south. If Link looks in that direction, he'll clearly be able to see where the Fairy Fountain is located.

Use the Paraglider to reach the Fairy Fountain. Offer up the rupees to Kaysa to get the Great Fairy to appear. While Link is here, he can enhance any of his armor if he has the appropriate materials.

Return to the Tabantha Bridge Stable and speak with Toren. He is very thankful that he was able to make his offering to the Great Fairy.[4][5] Although Toren gets a bit upset when he realizes that Link wants an additional reward from him.[6]

You told Toren that you made an offering to the Great Fairy.

Will Toren's lifelong dream of meeting the Great Fairy come true for him at last?