The Spring of Wisdom

This article is about the Shrine Quest. For the location, see Spring of Wisdom.

The Spring of Wisdom 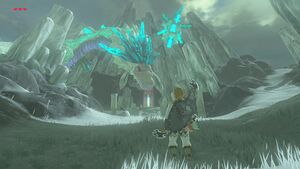 The Spring of Wisdom is a Shrine Quest from Breath of the Wild.

Link can begin the quest by speaking with Medda, who is a farmer at Hateno Village. During the daytime, Medda can be found farming behind the house that is located directly across from the Kochi Dye Shop. Medda will speak about the Spring of Wisdom, found on top of Mount Lanayru. It is a place where princesses of Hyrule Castle go for a purification ceremony.[1] After speaking with Medda, this will begin the shrine quest.

Talking to Medda is not absolutely necessary to uncover the shrine or performing the actions related to the quest, as Link can go to Naydra with no prior prompts. However, clearance of the quest itself in the quest list necessitates contact with her.

Mount Lanayru is at a much higher elevation and is very cold. Link will need to wear some armor with Level 2 Cold Resistance, such as the Snowquill Set in order to survive. Alternatively, if Link wears the Warm Doublet, along with consuming a meal or elixir with Cold Resistance or equipping a fire weapon, he will be able to survive. The quest will also require Link to use Arrows and it is recommended that he bring at least 10 Arrows.

When Link climbs to the top of the mountain, he will find Naydra, encased in Malice. Shoot the Malice Eyeball above Naydra's head, which will cause Naydra to begin flying around the mountain. Link will need to follow Naydra around and shoot the three remaining Malice Eyeballs. Each time Link removes some of the malice, Naydra will fly to a different area.

After Naydra has been freed from the malice, it will be restored to its original form and will fly back to the Spring of Wisdom. Link will appear back here as well and can then shoot Naydra with an arrow. This will cause Naydra to fly up and drop Naydra's Scale. Link can then run over and grab it, where he can then drop it in front of the Goddess Statue ahead as an offering. This will cause the door behind the statue to open, revealing the Jitan Sa'mi Shrine and completing the quest.

The Jitan Sa'mi Shrine is a blessing shrine. Run ahead and open the treasure chest to get a Frostspear. Then head over to the alter to meet Jitan Sa'mi and get a Spirit Orb.