From Zelda Dungeon Wiki
(Redirected from Goddess Hylia)
Jump to navigation Jump to search
Want an adless experience? Log in or Create an account.
Hylia 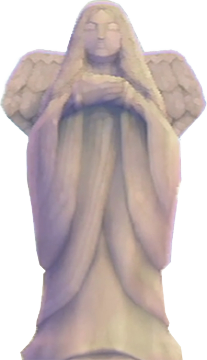 A Statue of Hylia in Skyloft

Hylia is a goddess introduced in Skyward Sword. A younger deity than the three Golden Goddesses, she remained associated with the land when the three elder goddesses returned to the heavens. While she was worshipped as the sole "Goddess" on Skyloft, knowledge of her apparently faded for many years, before seeing a resurgence in the far future, where every town features a Goddess Statue.

Hylia is the only known worshipped deity in Skyloft with no mention of the three Goddesses, and is often known only as "The Goddess". During the prologue of the game, her role in Hyrule's mythology is shown. She was meant to protect an Ultimate Power, which refers to the Triforce, passed down by the "old gods". When the land below is attacked by evil forces, she raises an island with the humans and the Ultimate Power on it into the sky. She and the remaining land dwellers fought off the evil forces.

She had sacrificed her divine form so she could later be reborn as a mortal. Zelda is the result of this. She regains her memories as Hylia before going back in time and into a coma to ensure that the seal on Demise, the King of the Evil forces mentioned in the prologue, holds until a mortal with unbreakable spirit - Link - uses the Triforce to kill Demise. When Demise is crushed by the Goddess Statue, Zelda awakens but is then kidnapped by Ghirahim, who goes to the past (where Demise is still alive) and resurrects Demise using Zelda's holy power.

Hylia appears to be worshipped widely, with a Goddess Statue in every town. When Link collects Spirit Orbs, he can go to one of these statues and Hylia's voice will offer to exchange four of them for a Heart Container or Stamina Vessel. Hylia's voice also speaks at the Spring of Wisdom to charge Link with freeing Naydra, and at the Springs of Power and Courage to guide him.

The Forgotten Temple is a temple to Hylia, said to contain the oldest (and largest) "Statue of the Goddess".