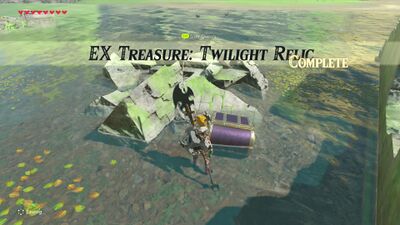 EX Treasure: Twilight Relic is a Side Quest found in Breath of the Wild. It was made available as part of the The Master Trials downloadable content.

Link can stumble upon Misko's EX Journal, found in the southernmost building of the Outpost Ruins. The journal states that the helmet of the princess of twilight can be found at the temple ruins that are soaked in the waters of Regencia River.[1]

The treasure can be found over at the Sage Temple Ruins, which are located just northwest of the Central Tower, right along the Regencia River. The ruins are protected by some dangerous Lizalfos that shoot Shock Arrows, including a Black Lizalfos. At the west side of the ruins, there is a Rusty Shield and a Rusty Claymore near a pile of damaged stones. Hidden underneath the stones is a treasure chest that can be pulled up with Magnesis. Open the treasure chest to get Midna's Helmet, which will complete the quest.