From Zelda Dungeon Wiki
Jump to navigation Jump to search
Want an adless experience? Log in or Create an account.
Central Tower 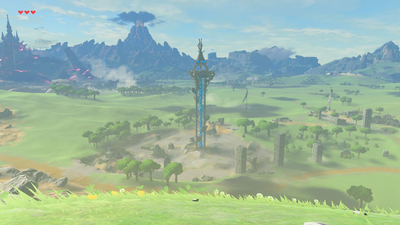 Central Tower is a Sheikah Tower in Breath of the Wild. It is located in Hyrule Field, Central Hyrule; north of the Great Plateau. The tower's travel gate faces West, opposite to the Central Plains.

The Tower itself is located within Hyrule Field, in the center of an unnamed ruined complex. While relatively adjacent to the Great Plateau, it is not recommended at all that Link travel to this region early in the game, as the area surrounding the tower is filled with Guardian Stalkers. Right at the Central Tower, there are a pair of Decayed Guardians that will spot Link when he's trying to scale the tower.

The tower is located just east of Mount Daphnes, though it's not close enough to the Mount to avoid the guardians by jumping from the mountain. As such, it's recommendable to approach the tower from the east or west and deal with the Decayed Guardians one by one while avoiding detection from the Stalkers. Albeit the tower is close enough to be in the range of the Stalkers, the tower's parapets provide prompt cover from those.

While Link was battling an invasion of monsters as part of the Hyrulean Army, Impa arrived, bringing the Sheikah Slate from the Royal Ancient Lab. She tripped, and as the Sheikah Slate went flying through the air, it activated an odd, diminiutive Guardian which had travelled from the future, at the end of the Great Calamity when Zelda was battling Calamity Ganon. Once active, the Guardian immediately raised the Central Tower from the ground nearby.  The Battle of Hyrule Field

The Central Tower almost immediately became a base where the Hyrulean heroes could warp to other places in Hyrule.