From Zelda Dungeon Wiki
Jump to navigation Jump to search
Want an adless experience? Log in or Create an account.
Digdogg Suspension Bridge 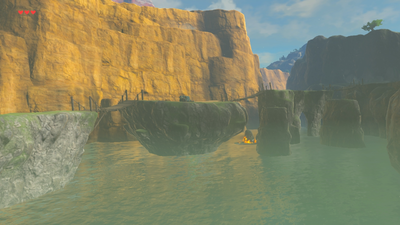 The Digdogg Suspension Bridge is a location found in Breath of the Wild.

The Digdogg Suspension Bridge can be found just west of the Great Plateau and it connects the road, leading from Hyrule Field, heading southward towards the Gerudo Canyon Pass. The series of bridges extend over a large unnamed body of water, which is the end point for multiple large rivers including the River of the Dead and the Regencia River.

At the center of the large island, Link will encounter a Blue Hinox. The hinox carries a Moonlight Scimitar and a Royal Bow around its neck.

There are numerous Koroks that Link can collect in the area around the bridge. Down below in the water, there are circle of rocks near the northeast part of the lake, as well as at the east end of the lake, near the waterfall. Toss a rock in the circle to get Korok Seeds. One more Korok cane be found near the water and it is just southwest of the largest island. Jump into the circle of lilies to get the Korok.

Way up on the side of the cliff to the west, just south of the waterfall that comes from the Regencia River, there is a rock that Link can pick to find a Korok. Another Korok can be found on the much lower cliff, located just northwest of the Dah Kaso Shrine. Use Magnesis to place the block in the proper spot to get the Korok.

The Dah Kaso Shrine can be found underneath the bridge on the ground level near the lake. The shrine is A Minor Test of Strength shrine, which has a Guardian Scout II who wields a Guardian Spear. After defeating him, open the treasure chest to get an Ancient Core. Then speak with Dah Kaso at the altar to get a Spirit Orb.

Just outside of the shrine, there is a Raft that Link can use to navigate the water and return to land. 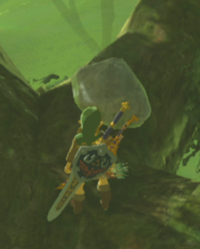 Lift the rock in the tree.

Climb up the tree and lift up the rock. 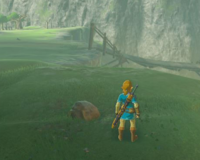 On the ledge there is a lone rock that you can pick up.

Throw a rock into the circle. You may have to slide the rock over a cryonis block. 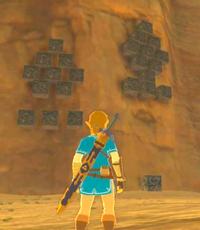