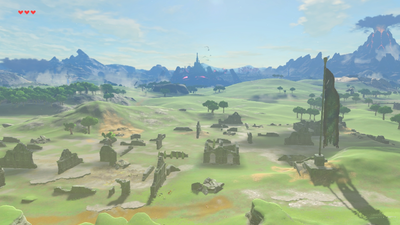 The East Post Ruins are a location found in Breath of the Wild.

The ruins can be found straddling the border between the Dueling Peaks Tower and Central Tower regions of Hyrule, located just northwest of the Proxim Bridge. The ruins cover a large area of land and they are protected by enemy Moblin and Bokoblin. Three large Red Moblins can be found in this area, along with a Red Bokoblin and Blue Bokoblin. Occasionally swarms of Keese will fly in and at nighttime, Stalkoblins will also appear.

The East Post Ruins are part of a series of ruins located on the pathway that leads eastward towards the Dueling Peaks. The Gatepost Town Ruins are just northwest of the Great Plateau, and following that path southeastward, Link will pass by the Outpost Ruins, before then reaching the East Post Ruins. The entrances near the road are identified by two massive flagpoles at each end of the ruins.

Throughout the ruins, there are a number of rusted weapons and shields found lying on the ground, including a Rusty Claymore, Rusty Halberd, Rusty Broadsword, and Rusty Shield. There is also a Wooden Shield found near the center of the ruins. Warm Darners are found all throughout the area and, if Link cuts down some grass, Restless Crickets, Hightail Lizards, and occasionally a Fairy can be found in the tall grass.

Just east of the ruins, there is a Bokoblin Camp right alongside the Hylia River. If Link defeats all the enemies a treasure chest will appear containing a Soldier's Bow.

The Bosh Kala Shrine can be found located just southeast of the East Post Ruins, on the other side of the road. 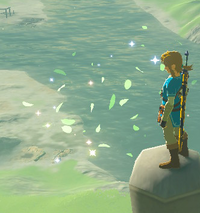 Climb the flag pole, then examine the fairy lights.

Climb to the top of the flag pole and examine the fairy lights. 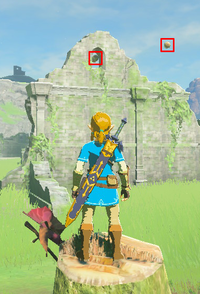 Stand on the stump, then shoot the flying acorns.

Stand on the stump and shoot the flying acorns.