From Zelda Dungeon Wiki
Jump to navigation Jump to search
Want an adless experience? Log in or Create an account.
Proxim Bridge 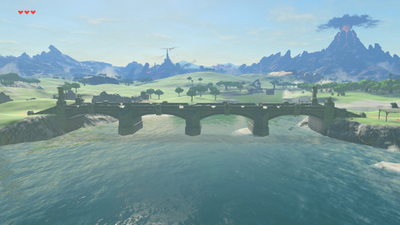 The Proxim Bridge is a location in Breath of the Wild.

The Proxim Bridge is located in the Dueling Peaks Tower region, between Hyrule Field and West Necluda. The bridge is along the path that crosses over the Hylia River and heads eastward towards the Dueling Peaks Stable. The Proxim Brige is larger than most bridges in Hyrule and has multiple fire pits that line the walls on the side. These will stay lit unless it rains.

The bridge is guarded by Brigo, a Hylian who patrols back and forth across the bridge during the day time. Brigo uses a Traveler's Spear to chase off any monsters, so that they don't make their home on the bridge. He does this to protect the bridge itself as it is an important route for travelers.[1] Brigo is also concerned for Link if he climbs up to the side of the railing. He is worried that Link might jump off the bridge to harm himself and encourages Link to come down.[2][3] Brigo is relieved once Link climbs down from the ledge.[4][5]

At the west end of the bridge, Link can find some Warm Darners flying around. There are also some Stamella Shrooms that appear right alongside the steps. In the water below the bridge and the nearby areas, Link can find a variety of fish, including Hyrule Bass, Staminoka Bass, Mighty Carp, and Armored Carp. 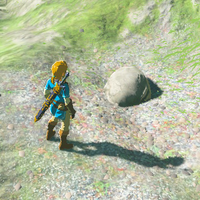 Pick up the rock. Resist the urge to immediately drop it on top of the Korok's head. 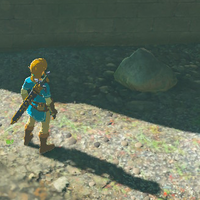 Look under the bridge, and pick up the rock.

Look under the bridge, and pick up the rock.