From Zelda Dungeon Wiki
Jump to navigation Jump to search
Want an adless experience? Log in or Create an account.
Hills of Baumer 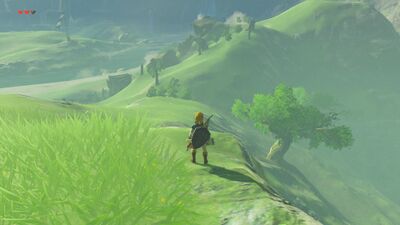 The Hills of Baumer are a location in Breath of the Wild.

The rolling hills situated in the West Necluda region. They overlook Squabble River to the north, the Hylia River to the west, and the Deya Lake to the south.

The Shelter from the Storm Recovered Memory can be found at the west apart of the Hills of Baumer, located just west of the Deya Village Ruins beneath a large tree. The area is distinguished by the two stone statues nearby and Bridge of Hylia which can be seen in the distance to the southwest.

At the far east end of the hills, there is a large tower near a small pond and at the top of it there is a treasure chest with a Silver Rupee. Next this tower there is also a small campsite where Link will find the traveling merchant Giro. He sells a variety of items, including Swift Carrots, Hearty Truffles, and Arrows.

Push the boulder into the nearby large hole.

Push the rock into the hole. 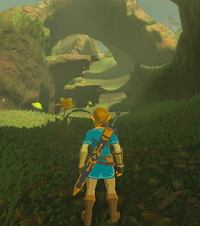 The flower trail takes you through the logs to the top. A boulder will roll down initially. 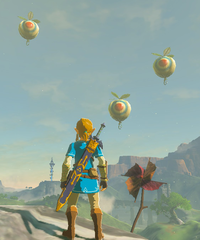