From Zelda Dungeon Wiki
Jump to navigation Jump to search
Want an adless experience? Log in or Create an account.
Owlan Bridge 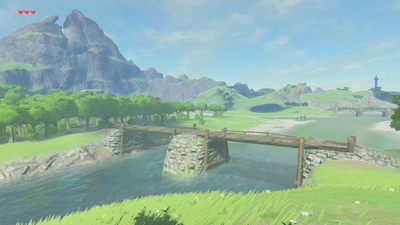 The Owlan Bridge is a location found in Breath of the Wild.

The Bridge is located just south of the Riverside Stable and just west of the Batrea Lake. It crosses the Hylia River and serves as a connection point between West Necluda and Hyrule Field. The Bridge also straddles the border between the Dueling Peaks Tower and Central Tower regions. The water under the bridge flows southward where it will pass the Proxim Bridge before spilling out to Lake Hylia

The water surrounding the bridge is home to a variety of fish, including Hyrule Bass, Armored Carp, Mighty Carp, and Staminoka Bass. Additionally, some Hot-Footed Frogs can be found in the water below.

In Master Mode there is a Sky Octorok platform just south of the bridge that contains a treasure chest with a Knight's Bow. 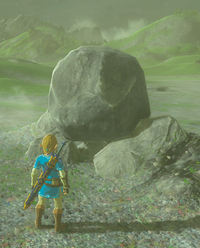 Remove the big boulder and then lift the smaller rock.

Stasis Rune works to remove the big boulder, and then hit it multiple times. Then pick up the smaller rock. 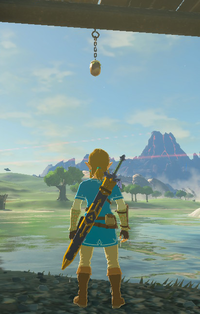 Under the bridge, shoot the hanging acorn.

Shoot the object hanging from the bridge. 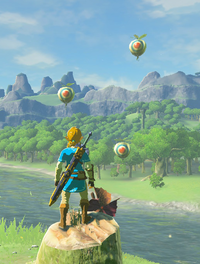 Stand on the stump and shoot the three balloons.

Stand on the stump and shoot all three balloons

The name "Owlan Bridge" is taken from Instructor Owlan, a character from Skyward Sword.