From Zelda Dungeon Wiki
Jump to navigation Jump to search
Want an adless experience? Log in or Create an account.
Great Plateau Tower 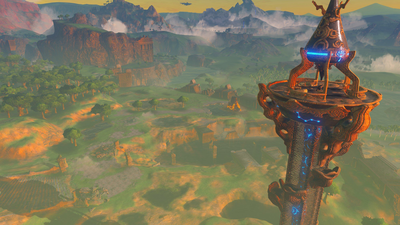 The Great Plateau Tower is a Sheikah Tower and location in Breath of the Wild.

The Great Plateau Tower is located on the northeast of the Great Plateau, and is the first one of its kind activated by Link. This Tower serves as the mechanism to raise all other towers from the ground, and activate all shrines located around Hyrule.

The tower's travel gate faces South, opposite the Central Region.

The tower is the only tower in the game that has to be activated for the plot to advance, while all the other towers are optional. Located in the western side of the plateau, it's the only tower that the Sheikah Slate provides a marker for. While not heavily guarded, Link has to make his way to the tower with seldom a weapon acquired, and it's flanked by at least two groups of Bokoblins sporting bows and arrows.

Activation of the tower and previous contact with the Old Man are required for the Sheikah Slate's clock to advance, and as such, non-activation prevents night from occurring. This prevents enemies like Stalkoblins and Keese from appearing.

The tower itself has little features aside from the fact that one of its openings is blocked by rocks. As stated in the Great Plateau page, the tower provides the terrain map for the smallest area in the game. It provides close-by access to Oman Au Shrine to the northwest and Ja Baij Shrine to the southeast.

Once the Great Plateau is cleared, there's little to no use for the tower itself, as the Shrine of Resurrection provides a more central travel gate.

"This is the tower everyone visits first in The Legend of Zelda: Breath of the Wild. The top part of the tower can be destroyed after taking damage, but will come back eventually. You can spot a certain Old Man in the background, watching over the match..."